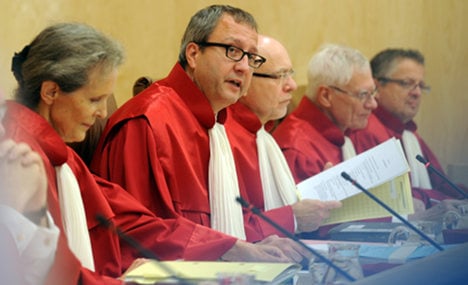 The Federal Constitutional Court in the southwestern city of Karlsruhe upheld the complaint of two opposition deputies filed this week to stop the nine-member body from taking any decisions on the European rescue fund.

The ruling, which says only parliament can approve such measures, is temporary pending a definitive decision by the tribunal.

The Bundestag lower house had only created the panel, comprised of members of all the parties in parliament, on Wednesday with the aim of allowing Germany to take quicker action to fight the crisis.

It was to have started work behind closed doors on Friday.

In particular, the committee would have been able to green-light decisions on the use of the €440 billion EFSF bailout fund for debt-wracked European nations, such as buying bonds or aiding threatened banks.

In early September the Court gave parliament a bigger say in decisions on saving the euro. The decision raised concerns that it would slow Germany’s reaction in crisis situations when speed is vital.

The head of the EFSF himself, Klaus Regling, had insisted on Germany creating a rapid-response body to head off turmoil while markets await action.

Depending on the urgency of the measures, the entire Bundestag, the 41-member budgetary committee or the nine-member panel would have been tasked with providing approval.

But the Court said the panel could threaten parliament’s sovereignty on budgetary issues, a “possible violation of the law” that could not be reversed if breached because Germany would have made “commitments that are binding under international law.”

The chief whip for Chancellor Angela Merkel’s conservative Christian Democrats, Peter Altmeier, said that despite the ruling, parliament would make sure the EFSF could be activated when needed.

“The German Bundestag will ensure that until a final ruling is made, Germany’s ability to take action and the ability of the European rescue fund to be used will be ensured at all times,” he told reporters. “We will, if necessary, take quick and effective action.”

But government sources told news agency DPA that the preliminary verdict would slow decisions on the EFSF and open the door to speculators exploiting the gaps before measures can be taken.

Government spokesman Steffen Seibert said he would not comment on an ongoing judicial review but pledged the administration would continue to work closely with parliament according to the tenets of the country’s Basic Law.

When asked when a final decision could be expected from the Court – something observers said could take months – finance ministry spokesman Martin Kotthaus told a briefing: “We can only hope it will be soon.”

Despite occasional grumbling among members of her coalition, Merkel has