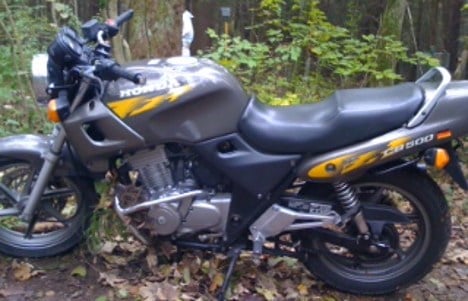 Hundreds of police officers, including special commando units, as well as dogs and a helicopter were still scouring the woods near the Bavarian city as dusk started to fall on Friday.

The state prosecutor has officially launched a murder investigation, while police released pictures of the motorbike they were riding in a bid for help from the public who may have seen it in the area over the last few days.

“We have secured a number of pieces of evidence, although I cannot release any information about them as they are part of our investigation,” Manfred Gottschalk from Augsburg police told The Local.

“We are releasing pictures of the motorbike they were riding, and the number plate it had – A-L 307 – although it is important to stress that this was not the real plate for the bike, but a copy, a faked number plate. We have already contacted the owner of a bike with that identification and he has absolutely nothing to do with the incident.”

The 41-year-old policeman was shot after he and his 30-year-old female colleague came across the two men with the motorbike in a car park in Augsburg at around 3 am on Friday.

The police officers initially wanted to perform a routine traffic check on the two men – and gave chase when the men jumped on the Honda CB500 bike and sped off into the woods.

At one point the bike slipped and the men fell off. When the police officers caught up with them, one of them fired with a large-calibre weapon from about ten metres away, hitting the policeman.

The female police officer fired several shots in return but it seems did not hit either of the two men, who fled on foot into the woods, leaving the motorbike behind.

Although the police officer was wearing a bullet-proof vest, he died at the scene, having been hit in the head or throat. He left a wife and two sons aged 13 and 17, the police said.

His colleague suffered a bullet graze injury on her hip and serious shock. She is helping with the hunt for his killers as best she can.

The attack prompted a huge manhunt, with more than 200 officers sealing off the large area around the Siebentischewald wooded area and the Hochablass waterway, north of the city.

“We’re using all the technological options that we have,” said Gottschalk.

But he admitted that if the men were not caught by the time night fell on Friday, the immediate hunt would have to be abandoned.

“We cannot continue in the dark. We have already found a number of promising pieces of evidence. If we do not find them before dark, other investigative methods will be employed.”

Augsburg Public Prosecutor Günther Zechmann told a press conference on Friday the perpetrators would be regarded as suspected murderers. He said they were probably already serious criminals, possibly involved in a big drug deal, who wanted to prevent the police officers discovering what they were doing.

Zechmann said the chase was highly unusual. “It was a course of events which even the most hardened investigators could not imagine… it was like James Bond on the Lech Bridge in Augsburg.”

It was the first time in 11 years that a police officer was killed in Bavaria. “Of course we follow all crimes with our full attention,” said Gottschalk. “But it was particularly tragic that this victim was a police officer.”