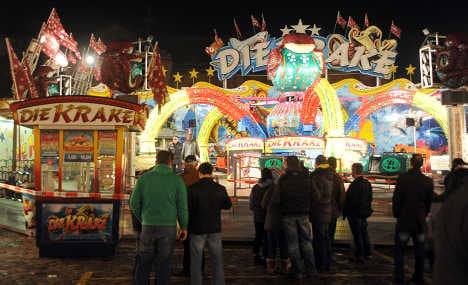 “The Kraken” ride at the Bremer Freimarkt normally rotates at high speed while passengers sit in several small pods attached by arms to a centre console. But the police said on Friday that one of pods carrying two people had broken off and was sent careening into railings in front of the crowd.

A 29-year-old woman, who had been in the pod, was in critical condition for a time, but doctors later said she had been stabilised. Of the eight others hurt, including a number of teenagers, three were hospitalised with severe injuries, three were treated for minor injuries and released and two suffered shock.

The ride operator stopped “The Kraken” immediately after the accident and police said its operation had been suspended while they investigated.

The cause of the incident was not immediately clear.

But Rudolf Robrahn, chairman of a local organisation representing carnival workers, said he was shocked by what happened. The ride has been used reliably for a long time he told the Weser Kurier newspaper.

A similar ride malfunctioned in Bavaria in September, however, injuring three girls.

Officials said the Freimarkt, one of Germany’s oldest public fairs with a history stretching back 1,000 years, would continue through Sunday as scheduled.

VACCINE
Bremen becomes first German state to give Covid jab to more than a fifth of residents
Url copied to clipboard!