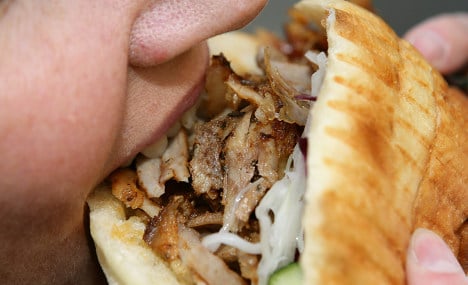 The meaty meals are also the basis of a €2 billion euro industry in Germany, employing thousands of people across the country.

Historians say the döner kebab is probably hundreds of years old, originally developed in the Turkish province of Erzurum. But it was not until the 1970s that the thinly sliced meat treat exploded in popularity through Germany, and then Europe.

For many people in Germany, the döner has so dominated the country’s fast food industry that it is no longer even considered foreign.

“Of course, the döner shop is part of Turkish roots in Germany, but for my 16-year-old son, the döner is a part of German culture,” Michael Hofmann, an expert in Turkish-German relations, told the DPA news agency this week.

It was Turkish immigrants in Berlin’s Kreuzberg district who decided to take the döner kebab – traditionally served on plate with rice – and stuff it into a bread pouch with salad and assorted toppings.

Since then, the snack has won fans across the world, even spawning its own annual convention and trade organisation called the Association of Turkish Döner Producers in Europe, based in Berlin.

Today German-style döners can be found everywhere from the United States to South Africa, the organisation’s head Tarkan Tasyumruk told The Local.

“It’s such a versatile food – everyone loves it,” he said. “It’s flexible and tastes great.”

Tasyumruk, who runs his own döner topping and meat production business near Berlin, is a tireless advocate for the food.

He rattles off the numbers: There are 16,000 döner snack shops in Germany. The industry employs 60,000 people nationwide.

Most of the ingredients in German döners, such as meat, vegetables and sauces are produced domestically by about 100 firms, Tasyumruk said – and many also export ingredients to döner sellers around Europe.

The largely independent, often family-owned businesses serving the donors use more than 122,000 tonnes of meat each year to serve millions of hungry Germans customers.

But the story of the döner is more than a tasty treat, experts say – it can be seen as a cultural symbol of sorts for the country’s Turkish-German community, one that is helping perceptions of them evolve for the better according to at least one academic.

“Maybe on a smaller scale it might be changing the way Turks are viewed by the German population,” said Dirk Halm, an expert at Essen’s Centre for Turkish Studies.

Although the success of the döner would not change some Germans’ general aversion to a multicultural society, he said, “It demonstrates a positive aspect of the immigrant group.”

At the local level, however, individual döner sellers are not thinking about the food’s widespread reach or its cultural appeal.

Instead they wonder how to get more customers to visit their shops. In this highly competitive but low-margin business, every euro counts, said Berrak Kervan who has been selling döner from his mobile cart around Berlin for the past three years.

On a recent day in the capital’s Kreuzberg district, Kervan said he knew the secret to being a successful salesman: Offer fresh ingredients and the highest quality meats.

“Everyone comes to me, Germans and Turks, because they know I have only the best,” he said. “Selling döner is something to be proud of.”