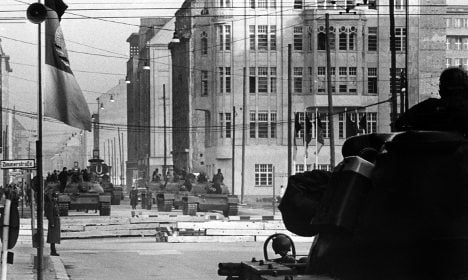 With tanks facing off just feet apart to see which side would blink first, a row over East Germans checking the passports of American military personnel as they went into Soviet-occupied East Berlin nearly escalated out of control.

After a terrifying 16 hours of eye-balling, Soviet leader Nikita Khrushchev told his soldiers to turn back their tanks, which they did one at a time. The US forces mirrored the gesture tit for tat, averting a potentially disastrous conflict in divided Berlin.

Blink while on Friedrichstrasse now and you’re likely to be hit by a bus full of tourists. The checkpoint crossing is alive with visitors, crowding round the temporary hoardings printed up with slices of history and black and white photos, paying a couple of euros to be photographed next to two actors dressed in historical military uniforms.

On Thursday – exactly 50 years after tanks took their positions on the street – that road was host to a group of German tourists on Segway scooters, swaying hesitantly as their guide told them the story. A group of sight-seer-carrying East German Trabant cars also rattled past, the smell from their two-stroke engines leaving perhaps the most ‘authentic’ thing of the moment.

The Haus am Checkpoint Charlie, a private depositary of Berlin Wall artefacts quietly dominates, but is now surrounded by commercial signs of which side won the Cold War – MacDonald’s is there, as is Starbucks and German chain bakery shops Kemps and Backfactory.

The atmospheric Café Adler at the corner, reputedly a meeting place for spies, but also a haven for tourists wanting a taste of older Berlin with their coffee is also gone, replaced by a Cafe Einstein, the historical décor replaced by neon lighting.

“Most of the independent shops have gone; they were forced out by high rents,” Karin Radloff told The Local. She owns the Laden am Checkpoint which has been selling tobacco since 1905 and now also stocks newspapers and magazines from around the world.

“There is a lot of history here, and I think we are portraying it well. We clubbed together, shops in the area, to build the checkpoint hut. I know that some people are less than positive about it, and the actors standing there, but I like it. At Brandenburg Gate there are people dressed up as polar bears and things. At least here it’s historical, it fits.”

A metal plaque is set into the wall covered in sandbags between the two men dressed as soldiers, commemorating the stand-off between the Soviets and Americans there. It briefly sketches out the moment the Soviets turned back.

Clemens Pfaff, 70, remembers the feeling of the time. The pastor at Berlin’s English-speaking Roman Catholic Mission was showing a friend the site. “I was in England at the time actually, studying theology and preparing to go as a missionary to East Africa,” he told The Local.

“There was a very real feeling at the time that there could be another war,” he said. “I remember the Cuba crisis afterwards very clearly. You had got used to the Cold War, and the nuclear weapons, but everyone was just hoping it would not come to war.”

Those hoping perhaps more than anyone else included Heinz Schäfer, an East German border guard at the time. “We had pistols, the Americans were armed – if only one soldier had lost their nerve, I don’t know if we would be sitting here today,” he said. “It was hard, it was dangerous, but we survived it without bloodshed.”

Tyler Willson was in one of the American M-48 Patton tanks. Speaking from his home in Jacksonville, Florida, he told the Jacksonville.com news site the Cold War suddenly seemed awfully hot with Soviet T-54 tanks just about 100 metres away.

“One dumb move and I don’t know if it would have been World War III but it wouldn’t have been good,” he said.

John Jungkeit, an American soldier with the 102nd Army Security Agency at the time, told The Local via email, “With three real war alerts in one week, troops were issued live ammunition in the field for the first time since the end of WW2.

“The Berlin Battle Groups had just been issued the new M14 rifle and a new type of ammunition. All other American troops in Germany still used the M1 rifle with different ammo.

“My job was monitoring friendly electronic communications to find out what secrets were leaking out to the East. I heard a US M48 tank commander receive orders to load a round in his 90mm gun, and leave off safety while keeping his sights on a T54

around 100 yards away. All the tanks guns were loaded and ready to fire at the height of the alert.

“The crowds on the east side of Checkpoint Charlie were giving wreaths of flowers to the Soviet tankers and cheering them on. On the west, the lead M48 had a small vase with a flower sitting on his turret.

“A short distance away, out of sight of the check point, a 3/4 ton truck sat with its engine running, ammo crates broken open with mortar shells ready to fire in their freshly dug fox hole. The engine was idling for a fast get away.

“On the parade grounds where the Battle Groups were waiting for orders, troops sharpened their bayonets and prepared their weapons for battle. When the alert was cancelled, fist fights broke out amongst the troops because they were so keyed up to fight. A nervous soldier on either side could have started a war.”

In the event, nerves were held, no triggers were pulled, and Berlin lived to eventually pull down its Wall, shake off its division and turn it into history.

“We love it, there is so much history here, we are working hard to understand everything here,” said Padmavathy Rajasekaran from Mumbai, on a holiday in Berlin with her family. “It all looks great, you can see where it was all happening back then, almost imagine it.”