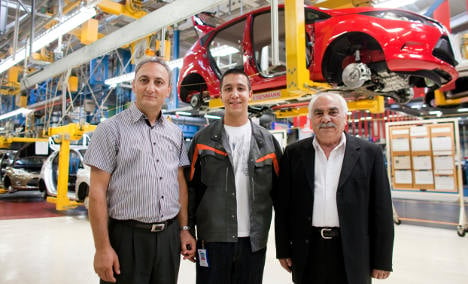 Driven by hopes of a prosperous life for his family, Cözmez pushed fear and doubt to the back of his mind as he packed his suitcase and boarded one of the special trains from Istanbul to Cologne.

Cözmez had been invited to work in Germany by car manufacturer Ford who, like many companies in the country at the time, was desperately trying to build up its workforce.

Germany found the manpower it needed in Turkey, and so hundreds of thousands of “guest workers” made the journey north to begin work, on contracts which were expected by all sides to be limited. By 1972 the Cologne Ford factories alone employed 12,000 Turkish workers.

The majority, like Cözmez, only planned to stay a couple of years – yet many, like he, stayed and put down family roots in German soil.

When the 27-year-old Cözmez took the train to Germany back in 1970, he left his wife and children at home. He disembarked the train in Cologne alone, yet was greeted with a warm welcome and live music at the station.

He shared a room with four other Turkish production-line workers and sent most of his earnings back home to his family.

Describing his early experiences in Cologne, Cözmez said “the German people were very welcoming and helped us a lot.”

“For example, when shopping, at the beginning I could only make myself understood with my hands,” said the 68-year-old. But he soon started a German language course.

“It’s only when you speak the language that you can begin to feel at comfortable in a foreign country,” he explained.

There were also advantages to be had at work – better wages for those who could speak German “as the lack of language skills was also a problem at work.”

Yet he had not planned on staying in Germany. “I worked here, but my heart was still in Turkey” he said. “I wanted to make some money and then go home. But Germany is a great country.”

And he realised that the quality of life in Germany could be much better for his wife and five children then it was in eastern Turkey – so he brought them over in 1980.

“A new life began for us,” said his son Mustafa, 47. Everything was different – the language, school, their entire environment. “That was very difficult for us at first.”

But he gradually made both Turkish and German friends and settled in. And although his dream originally was to study medicine, Mustafa followed his father to the Ford factory and completed an apprenticeship there. He became a production worker and has been a Works Council representative on the company’s supervisory board since 1997.

Mustafa Cözmez has a German passport but at the same time, remains true to his roots. “I think in German, I write German, but I live a German-Turkish life.” He said. His wife comes from the same town as the Cözmez family, and joined Mustafa in 1989.

Mustafa’s son, Ahmet, has a different outlook which illustrates the effect of being in Germany for two generations has had on the family.

Although the 16-year-old has followed his father’s and grandfather’s footsteps to work at Ford where he is an apprentice mechanic, his first language is German, and is having to learn Turkish.

“I find Turkish difficult, but my father places a great deal of importance on me speaking it fluently,” he said.

Every two years Ahmet and his parents visit relatives in Turkey. “I just could not imagine a life there,” he said. “I consider myself German.”

His grandfather Süleyman feels differently. “I am, and shall remain, Turkish” he stressed.

“Turkey is my first home and I cannot deny that, but Germany is my second. I want to keep them both.”