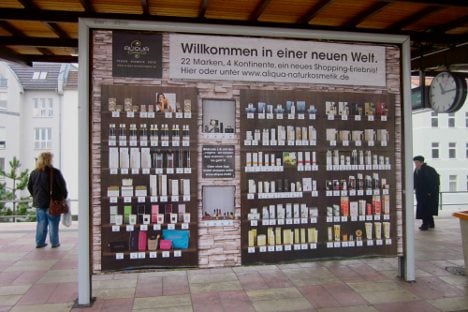 The posters, which have appeared on train station platforms in towns across the country, show a range of larger-than-life sized cosmetic products, each of which has a black and white QR code which can be scanned with a smartphone to make a purchase, with the goods then delivered to the customer’s home.

“The advantage is that one can find the desired product on the poster and order it directly, without having to first surf through the entire online shop,” Budnikowsky spokeswoman Wiebke Spannuth told The Local in an email.

She said the firm had taken the idea for poster shopping from supermarket giant Tesco, whose South-Korean branch Home Plus built virtual supermarket aisles in a Seoul train station last summer. Budnikowsky implemented the technology when devising its own picture-barcode combination for purchasing cosmetics on-the-go.

Though the chilly autumn air sweeping the platform at Berlin’s Pankow S-Bahn station on Monday could necessitate some of the hand creams and lip balms for sale on the posters, commuters seemed to find the idea more amusing than practical.

Barbara Gunter, 50, of Pankow told The Local she felt the sign’s 18 shelves of over-sized products were interesting advertising. “The poster has a lot of different brands that one isn’t familiar with,” she said.

But she does not have a smartphone and said she would not purchase items from the virtual store even if she did.

Annika Mai, 23, kept her smartphone stowed away as she waited for her train. “I wouldn’t use (the poster shop) … It’s pretty cluttered. You can’t really see what all is there,” she said.

For Mai, there was also a tangible problem with the poster store idea, especially when it comes to cosmetics: “You can’t smell the items, like the candles. I have to touch everything.”

Another commuter, Fabian Sehring, a 39-year-old 3D graphic designer, stood in front of the poster, rolling a cigarette while waiting for his train.

“The idea is relevant to the time,” he said. Sehring said he wouldn’t purchase poster cosmetics – his smartphone is currently out of commission, anyway – but he said he would definitely consider other sorts of virtual shops.

Despite the move being the European premier of online shopping 3.0, the posters will be a short-lived campaign, remaining in stations only until October 31.

“Of course, the online shop will exist thereafter and is accessible to everyone,” Spannuth said. “If the reaction to the posters is good, we are sure to repeat a similar campaign.”