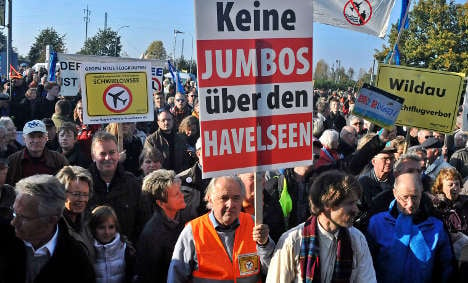 The hugely expanded airport is set to become the German capital’s only one as Tegel is due to be closed once the new hub opens with the unitary Berlin airport code BER.

But the proposed flight routes have proved controversial, with many of those set to have planes taking off and landing over their homes furious. Those at the demonstration were united in their call for a complete ban on flights between 10 pm and 6 am, according to a report in the daily Berliner Zeitung on Monday.

Currently there is permission for up to 103 flights between 10 pm and midnight, as well as during the hour after 5 am, leaving only five hours plane-free for those living under the flight paths.

“We should only have 224 more undisturbed nights, and then it’s over. We will not take that,” demonstrator Wolfgang Brenneis told the crowd from a stage, to loud applause.

Many also want to prevent the airport becoming a hub for international flights – where passengers only transfer from one flight to another – an explicit plan of the airport’s operators and politicians as it will increase profits.

The expanded airport is due to open at the beginning of June 2012. Plans are also being discussed for a possible second and even third terminal, for which permission has already been granted, the Berliner Zeitung reported. A third runway could even come into question.