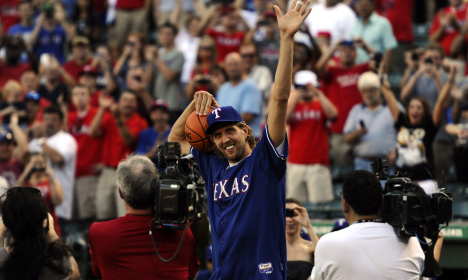 “If the lock-out lasts for a long time, I’d definitively have to look for something there in January or February,” he said at a press conference on Saturday.

The players’ union and team owners of the National Basketball Association, NBA, remain deadlocked over contract negotiations – prompting the cancellation of the first two weeks of regular play.

Nowitzki’s comments came on the sidelines of the third game of the US baseball World Series between the Texas Rangers and the St. Louis Cardinals. As a member of the Dallas Mavericks, also a Texas-based team, Nowitzki is a die-hard Rangers fan.

The German basketball star was given the honour of throwing out the first pitch at the game, in front of more than 51,000 spectators.

In the past, Nowitzki has quashed speculation that he could return to play Bundesliga basketball in Germany. Three teams – ALBA Berlin, Brose Baskets Bamberg and Bayern Munich – have publicly expressed interest in nabbing the star forward, but Nowitzki has said choosing one of them would mean disappointing the others.

“If he really wanted to play in Germany, then there would be only one club for him: FC Bayern Munich,” said Munich coach Dirk Bauermann.

With the NBA lockout still in place, Nowitzki said he plans to fly back to Germany in the coming weeks to train with his mentor and private coach Holger Geschwindner.

He also expressed his disappointment at the lack of progress in NBA negotiations between the two sides. “Hopefully we’ll achieve something soon, but it’s not looking good,” Nowitzki said.