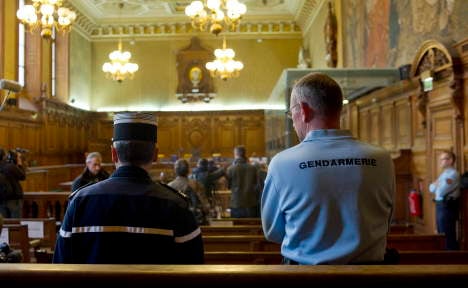 A Paris court sentenced Dieter Krombach, 76, to 15 years in jail after he was found guilty over the death of his stepdaughter Kalinka at their German home in 1982.

The girl’s biological father, Andre Bamberski, had Krombach kidnapped and brought to France in 2009, after German authorities decided he had no case to answer.

Bamberski will eventually face court himself for the vigilante action, which caused a media sensation.

Krombach, who went on trial on October 4, was convicted of “deliberate violence leading to involuntary death” at Paris’ main criminal court, bringing to an end the three-decade-long legal and diplomatic drama.

His lawyer Yves Levano said he would appeal the verdict, however.

Krombach showed no sign of emotion when he learned of his fate, while his red-eyed daughter went to take his hand across the screen of the dock.

Kalinka, a healthy 14-year-old girl, was found dead in her bed at the home she shared with her younger brother, her mother and step-father and their two children near Lake Constance in southern Germany in July 1982. A local autopsy proved inconclusive as to the cause of death.

Forensic examinations of the body did, however, call into doubt Krombach’s account of the hours before the death.

His credibility was weakened in 1997 when he was convicted of drugging and raping a 16-year-old patient – a case with no direct bearing on the French trial, but one that increased the suspicions of Kalinka’s father.

German judges had dismissed the case in 1987, and Germany refused to send Krombach to France in 2004 when Paris issued a European arrest warrant, on the grounds that no one should be tried twice on the same charge.

Krombach had been convicted in absentia by a French court of “deliberate violence that led to involuntary death” – but under French law, when someone tried in absentia is later arrested, there is a new trial.

There would have been no new trial, however, if Bamberski had not taken the law into his own hands.

He hired a kidnap team, and in October 2009, they snatched the doctor from his home in Scheidegg and brought him to France.

There, they abandoned him, trussed up, near the law courts in the border town of Mulhouse. Krombach was promptly arrested.

Bamberski has never made any secret of what he did, and expects to stand trial for his acts in several months.

He had been hoping for a conviction for murder against Krombach. But after the verdict, he said: “Everything I have done has been for this, what I wanted, a fair and full trial … I am going to be able to grieve.”