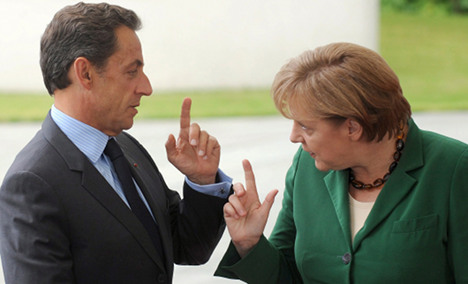 She told members of her conservative Christian Democratic Union and its sister party, the Christian Social Union on Friday, that the time was approaching when one would have to recognise that the agreed write down of 21 percent was not going to be enough, according to members at the parliamentary party meeting.

Thoroughness must be more important than speed in taking measures taken to fight the euro crisis, she said, adding that the measures would have to work.

Finance Minister Wolfgang Schäuble said Europe faced a ‘serious’ crisis as he arrived in Brussels on Friday for talks with his counterparts from other countries ahead of a crunch summit on Sunday.

“We have a great responsibility; we all know it, to Europe, to the eurozone but naturally also to the world economy,” he said.

He said the eurozone crisis was “spilling into the real economy,” and insisted that “we have to come up with a European solution before the G20 summit in Cannes (on November 3 and 4).”

Economy Minister Philipp Rösler, from Merkel’s coalition partner the Free Democratic Party (FDP), stressed said there would be no banking license for the European Financial Stability Facility (EFSF) – a sore point with the French, who had been pushing for exactly this. Such a license would enable the EFSF to borrow money from the European Central Bank.

“Colleagues, friends and partners in France want that. But, for us as the federal government, as the coalition overall, that should not be done,” said Rösler. “That is Germany’s clear position in these discussions with France and our European partners.”

Merkel was at pains to deny one press report on Friday that she was frustrated with French intransigence on this matter. “The French are not moving an inch,” she was reported by the tabloid Bild newspaper as saying to a small circle of people. Yet her spokesman denied she had said such thing.

Rather than differences with the French being the problem – and Merkel’s plans to make a government statement on the matter on Friday were shelved at the last minute – she said that parameters for using EFSF money to help struggling economies were “technically difficult to design.”

Foreign Minister Guido Westerwelle, of the FDP, has proposed his own idea for helping solve the debt crisis in a document seen by the Süddeutsche Zeitung and reported on Friday.

This would turn the EFSF into a European Monetary Fund with the ability to intervene in unstable countries’ budgets and take over countries’ insolvency processes if they can’t pay off debts, the paper said.