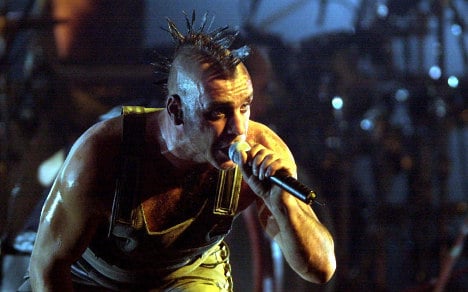 City authorities forced the band to postpone the sold-out concert in the Olympiahalle as it was not seen as fitting for Totensonntag, or Dead Sunday.

An appeal to the courts was rejected and the band is now rescheduling for two days later, as well as offering its fans who cannot go on the Tuesday, their money back.

“It appears absolutely arbitrary that a Rammstein concert should be banned, while dozens of other concerts are allowed to take place,” a statement on the band’s website says.

A cursory search for other events planned in Munich for November 20 reveals a concert by the rock-folk band Schürzenjäger, a jam session at the Munich jazz club Unterfahrt, a gig by surfer band The Drums, as well as numerous theatre performances, a matinee ballet and a morning classical piano recital, as well as a Murder Mystery Dinner at the Villa im Bamberger Haus.

“We do not have any problem with Rammstein and are happy that they are coming to play here two days later. But it is not possible for them to play on Totensonntag,” Munich city spokeswoman Daniela Schlegel told The Local.

She said Bavarian law meant that only events “of a suitably serious character” were allowed to take place on such a day.

“This does not mean that there cannot be any musical performances at all; just that they must fit with the serious character of the day. Anyone who knows or has heard of Rammstein knows that it is very loud, with strong bass elements to the music and that the entire performance, with lights, pyrotechnics, and perhaps a person on fire, or obscenities, would not fit with the serious nature of the day.”

When asked about the other events scheduled for November 20, she said that perhaps pop groups might be asked to focus on their ballads in their performances, and added that if Rammstein were to tone down its performance, “it would no longer be Rammstein.”

Rammstein’s number one album Liebe is für alle da or ‘There’s Enough Love for Everyone,’ was put on Germany’s censorship index in November 2009, meaning those under 18 could not buy it.

The censors said the album promoted unsafe sex and portrayed sexuality and power in a sadomasochistic manner. The ban was lifted after six months.

But Rammstein fans are not the only ones forced to bend to Bavaria’s fierce protection of Christian holy days – each year, Halloween parties are shut down at midnight in the southern German state because of the Catholic holiday All Saints Day on November 1.