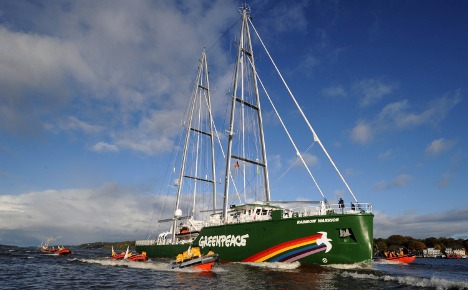 “It was quite a shaky night,” said German press officer Patric Salize, who spent Wednesday night rocking in the boat’s front cabin as the Rainbow Warrior traversed the North Sea along Germany’s coast on its way to Hamburg.

But despite the waves, being on board with the crew was an honour for Salize, who started working for Greenpeace as a volunteer 15 years ago.

The original Rainbow Warrior – a converted fishing trawler – was sunk in 1985, blown up while in Auckland harbour, New Zealand, by French secret service agents who wanted to prevent it leading a peace flotilla to protest French nuclear testing in the Pacific. Photographer Fernando Pereira drowned as the boat filled with water.

“We are continuing what colleagues began many years ago by using a boat to denounce attacks on the environment,” said Brigitte Behrens, Greenpeace’s director in Germany, referring to the history of the organisation’s boats and the heritage of the Rainbow Warrior name.

Purpose-built and packed with technology, the Rainbow Warrior III made its maiden voyage on Wednesday, successfully navigating the 125 nautical miles from the northern German port of Berne-Motzen to Hamburg, where it was greeted by the Greenpeace ship Beluga II along with the organisation’s fleet of rubber dinghies.

In Hamburg, the boat will be open to the public between 10:00 and 16:00 on Saturday and Sunday, before continuing to Amsterdam – its home port and Greenpeace’s headquarters – on October 25. Because the boat is designed for a world-wide campaign, it is likely to be years before it returns to German waters.

Greenpeace enthusiasts sponsored the construction of the ship – the first one to be built by the environmental organisation from the hull up – with more than 100,000 donors contributing to the approximately €23 million ($32 million) needed for the construction work.

The donations functioned more like a wedding gift registry than a typical tax write-off, though, with people deciding what they could sponsor. “From the toilets, the cameras, the galley – everything could be bought,” Salize said.

The 680-tonne ship is perfect for its environmental endeavours – it was built to meet strict environmental criteria and, as a sail boat, leaves a very small carbon footprint. Heat from the ship’s engine is recycled to warm up the cabins, while used water is treated and purified by a biological system. Up to 32 people can live in the double cabins on board the new boat, which can stay at sea uninterrupted for up to six weeks at a time.

The building process began in 2005, when Greenpeace asked members and staff what functions a new ship might need. The organisation then produced a 300-page manual, which was used as the basis for designing the ship. Actual construction lasted 18 months and was finished in time and on budget.

It is powered by sails, the largest of which is 1,300 square metres, an electric motor allowing it to reach a top speed of 10 knots and a diesel engine giving it 15 knots. The ship was constructed at the 161-year-old German shipyard Fassmer, and the hull was made in the Polish port of Gdansk.

After an introductory tour of Europe the Rainbow Warrior III will set sail for the American coast before heading along the Amazon in Brazil to campaign against climate change.