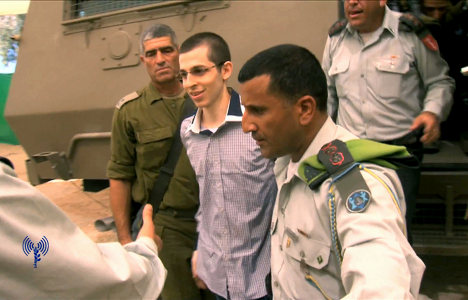 German Chancellor Angela Merkel welcomed the release of Shalit on Tuesday, while praising Egypt for its role in clinching the exchange deal. “The chancellor thanks everyone involved in Shalit’s release. Her special thanks go to the Egyptian government whose role has been crucial in the past months,” her spokesman Steffan Seibert said in a statement.

But Foreign Minister Guido Westerwelle acknowledged some help closer to home. Alluding to Germany’s behind-the-scenes mediating role, he said in a statement he was pleased “that Germany was able to contribute to Shalit’s release.”

Perhaps the most instrumental contribution within the Bundesnachrichtendienst (BND) came from an agent named simply Konrad, or Conrad, who, according to the Süddeutsche Zeitung newspaper, has developed a reputation as a “man for particularly difficult cases.”

Konrad, of whom no picture has ever been released, was already involved in prisoner exchange negotiations between Israel and the Lebanese Hezbollah militia in 2004.

He became more prominent in 2008, when the bodies of two dead Israeli soldiers were exchanged for five Hezbollah prisoners and 200 dead fighters, after which he was nicknamed “Mr. Hezbollah.”

Konrad, 50 years old, six feet tall and with perfect Arabic, French and English has worked in the Middle East for several years.

He read Islamic studies at Heidelberg University, completed a PhD and began his service for the BND in German embassies in Lebanon and Syria, when he developed strong contacts with the Palestinians. For the past ten years he has been working at BND headquarters.

Shalit, imprisoned by radical Islamic group Hamas in Gaza five and a half years ago, was exactly the kind of “particularly difficult” case Konrad specialized in.

Germany has no official communication with Hamas. For that reason Konrad’s negotiations with the group, which began regularly in 2009, were carried out under a “personal mandate,” though that of course did not prevent him reporting back to the German government.

He was helped by the BND’s relatively good reputation in the Middle East, where they are considered honest and even-handed negotiators. Only once – last summer – has a Hamas spokesman suspended communication, but even then Gaza governor Mahmoud al-Sahar allowed Konrad to stay on the scene.

There were reportedly several such obstacles in the drawn-out negotiations, largely because of internal divisions on both the Palestinian and Israeli sides. On top of that, the fall of President Hosni Mubarak meant that all the Egyptian negotiators were replaced, which brought talks to a standstill.

Nevertheless, the BND insists that Egypt should take the most credit for facilitating the deal.