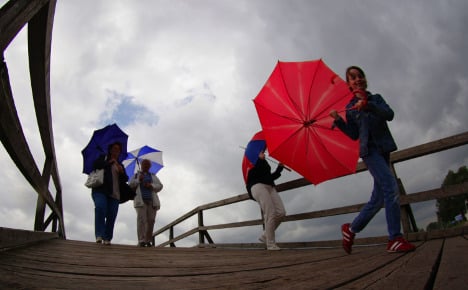 The high pressure system Tessina, responsible for the clear sunny skies which have recently stretched over the country, but also for the chilly nights, is now moving eastward toward Russia, along with the sunshine. In its place, the low pressure system Klaus is expected to roll in from Iceland, bringing rain, clouds and fog.

“The cold front of the low pressure system will reach to the east and south of Germany during the course of the day on Tuesday. Thus the mostly unadulterated sunshine will also be gone there. Many clouds, rain and at times brisk winds are next up on the weather menu,“ said DWD meteorologist Simon Trippler.

Overnight Monday, clouds will start to build up out of the north west, and areas along the North Sea will experience the first rainfall. A cool, brisk wind will also blow along the coast from the south and south west. Eastern and southern Germany will remain partly clear, partly foggy – and temperatures will drop as low as zero degrees Celsius in the south east before the fog burns off. In the north, highs will be around 11 degrees.

On Tuesday, the rain will expand through eastern and mid-Germany, with possible thunderstorms accompanying the showers on the North Sea. But the area from Saxony to the upper Rhine region will remain mostly dry. Temperatures will range from 11 degrees in the north to 20 degrees in the south west.

Wednesday will remain wet and stormy along the north-western coast, although the north east will experience little rain. Showers are expected throughout the rest of Germany, though, with the only exception in the most south-eastern region. Highs will be between 6 and 13 degrees, with light to moderate wind in the south and stronger squalls in the north.

Temperatures are expected to drop overnight Wednesday, predicts the DWD, with rain falling Thursday in the south east. More mountainous regions will experience sleet and snow. Otherwise, scattered showers will continue throughout Germany, with heavier precipitation in the North Sea region and extended rain in lower mountain areas. Temperatures will remain between 6 and 11 degrees.

“The sun’s rays will hit the earth much less over the next few days,“ Trippler said. “But for next weekend, there’s the possibility that the formation of a new high pressure cell over Germany, will bring the ‘Golden October‘ back. But of course only when fog and haze aren’t a problem.“