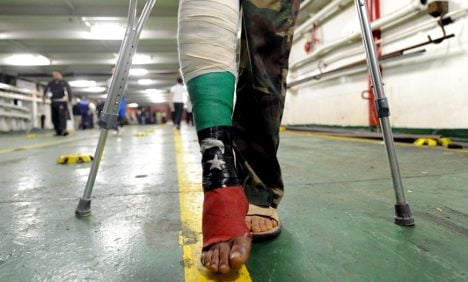 The men, aged between 23 and 30, were landed at Hamburg-Fuhlsbüttel airport and brought to Asklepios Westklinikum hospital in Hamburg.

One of them, a 29-year-old who suffered severe brain injuries, was in intensive care. The condition of the four others, wounded by firearms, was described by a hospital spokesman as “relatively stable.” He also described them as very happy to be in Germany.

Seven more patients were due to arrive at the hospital on Tuesday as part of a group of about 40 wounded fighters to be flown in from Libya for treatment in different German towns, hospital and foreign ministry officials said.

Ten-year-old Suliman Salem from the town of Ajdabiya became the first victim of the Libyan civil war to be treated in Germany, when he was brought to Bremen four weeks ago.

The German government announced a plan to bring more war victims over a week ago. A Foreign Ministry spokesman promised that the help would be swift and unbureaucratic.

On a recent trip to Tripoli, Economy Minister Philipp Rösler said at least 150 injured people would be taken in, including both civilians and militiamen who had fought for the National Transitional Council, the new government that deposed dictator Muammar Qaddafi in Libya a few weeks ago.