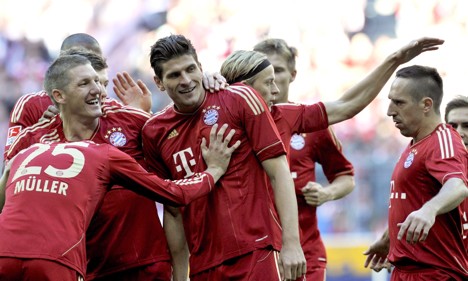 Bayern, who finished a massive 10 points off Borussia Dortmund’s pace last season, were quick to extinguish any hopes of an upset by racing 3-0 up thanks to goals from Mario Gomez, Franck Ribery and Bastian Schweinsteiger.

Gomez added his second from a spot-kick in the 69th minute to seal a comprehensive win for Jupp Heynckes’ seemingly unstoppable side, whose lead was boosted by results elsewhere.

“The team has come out of the international break and immediately hit the ground running with total focus on the Bundesliga. We were outstanding, especially in the first half,” said Heynckes.

“We let the ball do the work, our passing was brilliant and we scored three early goals. It was a superb start to the match. We showed all our authority in the second half, retained possession and still created a few chances.”

Borussia Mönchengladbach looked set to claim a precious 2-1 win at home to Bayer Leverkusen but had to accept a share of the spoils after Leverkusen striker Andre Schürrle fired home in the 87th minute to level.

Mönchengladbach still moved up one place to second, five points behind Bayern, who now have a six-point cushion on Dortmund, Stuttgart and Bremen – all of whom have played nine games.

Dortmund had moved temporarily up to second on Friday with a 2-0 away win that ended Werder Bremen’s undefeated spell at home.

Elsewhere, Wolfsburg had Mario Mandzukic to thank for a brace in a 2-1 home win against Nuremberg.

The Croatian, who scored a goal against Latvia in their final Euro 2012 qualifier in midweek, opening his account in the 23rd minute and cancelling out Christian Eigler’s 70th-minute leveller with a penalty in the 83rd minute.

Stuttgart picked up a precious 2-0 home win against Hoffenheim, while league new boys FC Augsburg moved further away from the bottom of the table after a 1-0 away win at Mainz.

Bayern’s latest demonstration means they are unbeaten in 14 matches in all competitions, and augurs well a few days ahead of their Champions League trip to Napoli on Tuesday, when they will defend their lead of Group A.

Hertha secured promotion to the Bundesliga in May after a season in the German second division but the gulf in class between the sides was evident almost immediately as Bayern opened up a 3-0 lead inside 13 minutes.

French international Franck Ribery was inspirational, providing assists for both Gomez’s opener and Schweinsteiger’s 13th-minute goal, either side of getting on the scoresheet himself.

He was also instrumental in Bayern’s penalty, which Gomez converted to remain the league’s top scorer with 10 goals.

Hertha, who have 12 points from nine games, were lucky to come away so lightly with both Thomas Müller and Jerome Boateng missing chances.

On Sunday, fourth from bottom Freiburg host fellow strugglers Hamburg, who sit bottom, while Hannover will be looking for their fifth win of the campaign away to Cologne.