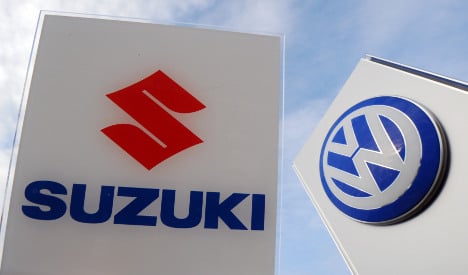 Suzuki said it served Volkswagen with a “notice of breach,” claiming it was not given access to technologies promised under their €1.7 billion ($2.3 billion) tie-up. It demanded that if the German firm does not offer access to the hybrid technologies, the auto giant must sell back its stake and quit the alliance.

“The notice requires that VW remedies numerous breaches of the companies’ Framework Agreement,” the statement said.

Suzuki is seeking action from Volkswagen within two weeks, according to spokesman Hideki Taguchi, adding that the firm hopes to reach an amicable settlement.

The Japanese automaker in September said it wanted to end its two-year venture with Volkswagen following disagreements on how to operate together. They formed a tie-up in 2009 under which Suzuki expected to beef up its development of green technology.

Chairman and CEO Osamu Suzuki said in a statement: “This capital alliance was intended to facilitate Suzuki’s access to VW’s core technologies. I remain disappointed that we have not received what we were promised.”

“If Volkswagen will not allow access it must return Suzuki’s shares,” Suzuki said.

“We believe that the Suzuki allegations are unfounded,” a Volkswagen spokesman said when contacted by AFP, adding that it “had always complied with the rules of the contract between the two groups.”

It said it “was considering all options,” implying it may also consider legal action.

Ahead of Suzuki’s move last month toward ending the partnership, relations had become frayed as Volkswagen served notice of an alleged infringement relating to the supply of diesel engines to Suzuki from Italian carmaker Fiat.

Volkswagen’s purchase of the 19.9-percent stake in Suzuki in December 2009 had been seen as an opportunity for both carmakers to benefit from their respective strengths in hybrid and small-car technologies.

Suzuki planned to seek support from Volkswagen in hybrid technologies and other eco-friendly areas, while the German firm hoped to jointly develop small cars for emerging markets by taking advantage of Suzuki’s know-how.

But they made little progress and have since halted their joint projects.

Suzuki complained that its autonomy was being jeopardised and that it was being treated like a subsidiary by Volkswagen.