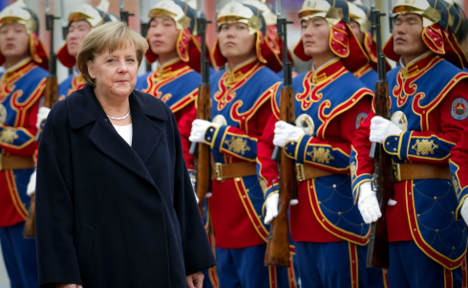 “There is plenty more potential for economic cooperation between our two countries to grow,” the chancellor told journalists in the Mongolian capital Ulan Bator after meeting the president and prime minister.

“I presented Germany as a partner that was keen to develop a durable and equitable long-term relationship.”

Merkel, in Mongolia with a large business delegation, said the framework agreement signed on Thursday – details of which would be fleshed out in the coming months – would include rare earths and copper.

German firms had said they were keen to conclude agreements in Mongolia on rare earths, substances that are critical for the manufacturing of products like iPods, low-emission cars, wind turbines and missiles.

Merkel said Prime Minister Sukhbaatar Batbold had expressed interest in German technology relating to the exploration of copper and other minerals including rare earths.

Mongolia is hoping to stimulate growth and pull people out of poverty in the mineral-rich but still underdeveloped country and Batbold said German technology would allow his country to develop its fast-growing economy.

“We don’t want to just export raw materials. German technology will help us develop our resources,” he said at a joint press conference with Merkel. “I am very happy that we have made agreements in mining and development. We especially appreciate high-quality German technology.”

The chancellor, who arrived in Ulan Bator late Wednesday from Vietnam, is the first leader of a G7 country to visit Mongolia since US President George W. Bush in 2005.

The chancellor’s visit came weeks after Germany’s courts released a top Mongolian security official extradited from Britain to Germany on suspicion of kidnapping a crime suspect.

Bat Khurts was freed last month after German prosecutors lifted a custody order. He was accused of kidnapping a Mongolian murder suspect and abducting him from Germany in May 2003.

His extradition to Germany sparked anger in Ulan Bator, which accused Britain of luring Khurts to London to arrest him.