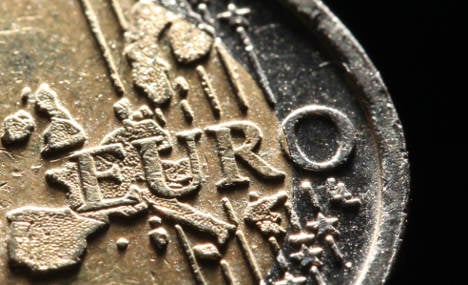 The economy will grow by a mere 0.8 percent in 2012 as Europe’s sovereign debt crisis continues to undercut activity, the institutes said. A dramatic downwards revision from the 2.0 percent they forecast just six months ago.

“In the middle of 2011, the outlook for the world economy deteriorated sharply. In Europe, the debt crisis is broadening out into a banking crisis. This is increasingly affecting the German economy,” the institutes said.

“The clear rise in uncertainty will dampen domestic demand and exports will no longer contribute to growth due to the difficult position of our important trading partners,” they added.

The German government, which bases its own forecasts on the report, announced in April that 2012 growth would be 1.8-percent. It is expected to revise that downwards when it unveils updated projections next Thursday.

Economy Minister Philipp Rösler acknowledged that the crisis was affecting Germany but also noted that the institutes predicted a fall in unemployment from 7.0 percent in 2011 to 6.7 percent next year despite the slowdown.

“The euro debt crisis is hitting Germany’s economy. For that reason, Germany has to remain an anchor of stability and growth in Europe,” he said in a statement. “We can make a contribution with our strong competitiveness as well as a positive trend on the labour market and our solid public finances.”

Rösler’s ministry had already warned in its monthly economic report that risks to growth have increased sharply due to the eurozone crisis.

However, output this year will continue to be relatively robust, the institutes predicted. Growth should be at 2.9-percent, better than the 2.8-percent outcome the government expected.

Europe’s powerhouse economy recovered from the last crisis better than most. After a crippling recession where output contracted by around 5-percent in 2009, Germany bounced back with spectacular growth of 3.7-percent last year.

A government-backed scheme to reduce employees’ hours kept a lid on unemployment and Chancellor Angela Merkel poured billions of euros into the economy as a stimulus measure to keep the wheels turning.

The positive trend continued into the first quarter of 2011 but analysts were shocked at a disappointing second quarter as the economy shuddered nearly to a halt, registering meagre 0.1-percent growth.

Since then, forward-looking indicators for the economy have not given grounds for optimism. The closely watched Ifo index of business confidence has fallen to its lowest level in more than a year and investor confidence is also on the decline.

Industry, one of the main motors of the German economy, appears to be spluttering, with shops reporting slowing trade and industrial orders down.

Exports, Germany’s driving force, have until now been resilient but economists warn that even the world’s second largest exporter after China will not be immune for long to a eurozone debt crisis that is damaging world demand.

The institutes predict the economy will crawl along for the rest of the year, with expected output of 0.6-percent in the third quarter and a further contraction of 0.2-percent in the fourth.

However, the silver lining to the cloud was the projection for Germany’s public deficit.

As Berlin insists that other debt-wracked eurozone countries reduce their deficits as quickly as possible, Germany seems to be leading the way, with 2011’s estimated deficit of 0.9-percent of Gross Domestic Product predicted to fall to 0.6-percent in 2012.