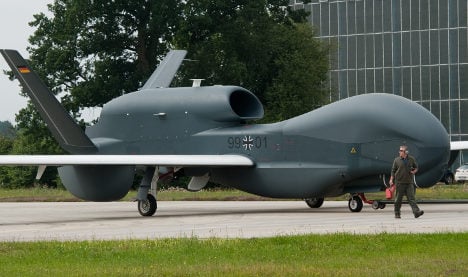 “It’s a milestone for us,” project leader Rüdiger Knöpfel told Die Welt newspaper in Manching, Bavaria, where the drone was presented by the Federal Office of Defense Technology and Procurement.

The Euro Hawk weighs 15 tonnes, has a wingspan of 40 metres, and can fly non-stop for 30 hours, covering a distance of up to 25,000 kilometres – enough to fly from Berlin to Tokyo and back without a break.

The drone will be used for reconnaissance missions in conflict regions like Afghanistan, scanning terrain and spotting enemy positions from a height of up to 20,000 metres – way above the altitude reached by commercial jets. The drone is also able to pick up TV and radio signals and intercept phone calls and text messages.

Knöpfel said the drone would vastly improve the Bundeswehr’s intelligence capabilities. “At the moment we’re deaf when it comes to electronic reconnaissance,” he said.

The data it collects will be transmitted in real time to a base in Nienburg, Lower Saxony, though it is still being tested in Manching. In July, a Euro Hawk prototype successfully completed a 10,000-kilometre test flight from California to Bavaria.

The US armed forces already use a similar super drone called “Global Hawk,” built by the armaments company Northrop Grumman. The Euro Hawk, which took ten years and €1.2 billion to develop, will be built by Cassidian, the military arm of European aeronautics and defence company EADS.

Eleven Bundeswehr pilots have been trained to steer the Euro Hawk from the ground. Further test flights will take place in Bavaria this week. The drone is expected to fly its first missions next summer.