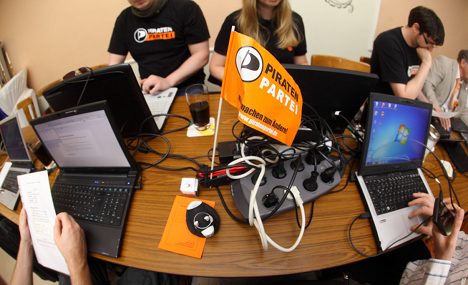 The revelations are controversial because the NPD is widely seen as a racist party supporting extreme right-wing stances.

In contrast, the Pirate Party, which recently made big inroads in Berlin’s state elections and is winning increasing support nationwide, portrays itself as a party based on freedom and the protection of civil rights. Recent polls have shown surging figures, with up to nine percent of Germans supporting the Pirates.

According to the Süddeutsche Zeitung newspaper, Seipt was an NPD member from at least 2007 to 2009 and was, for a time, a deputy district chairman for the NPD.

The 25-year-old told the newspaper that he had joined the group as an impressionable youngster, then struggled to break away. He said he was resigning from the Pirate leadership position in order to “prevent harm” to the party.

“The NPD’s structure is a cult and there is big pressure on the individual,” he told the newspaper. “These people were standing outside my door and threatened my friend.”

Bahner said he had joined the NPD in 2003 at 18, not realizing the ramifications. He called it a “youthful indescretion.”

Michael Rudolph, the party’s leader in Mecklenburg-Western Pomerania, told Die Welt newspaper that members would discuss Bahner’s past at a meeting later this month. He said the party tries to give members a second chance after making mistakes.