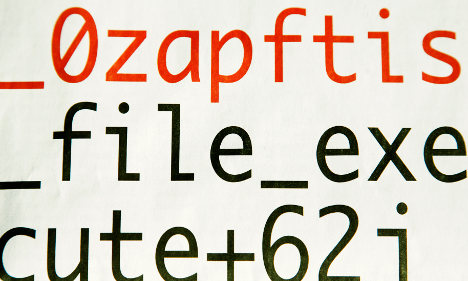 According to hackers from the Chaos Computer Club, who hacked the police viruses last weekend, the so-called “state-trojans” can be used not only as surveillance but to completely control computers remotely. The German constitutional court has declared this unconstitutional.

German Interior Minister Hans-Peter Friedrich on Tuesday advised the individual German states not to use the software in question.

Sebastian Nerz, chairman of the Pirate Party, who have campaigned for internet freedoms, said, “It is absolutely impossible to install a trojan that meets legal requirements.”

He added that because of the state trojans, a judge would never be able to tell whether evidence allegedly found on the computer of someone under surveillance had not been altered or fabricated later.

He also said that the scandal sparked by the CCC had shown that the authorities “were either a little naive or intentionally broke the constitution.”

FDP legal spokesman Marco Buschmann told the Neue Osnabrücker Zeitung, “The newly uncovered state-trojan feeds substantial doubts that the use of spy software is possible under the German constitution.”

But Günter Heiß, head of the department responsible for the issue in Chancellor Angela Merkel’s office, attempted to defuse concerns.

“The authorities that use the programmes tailor the software to each investigation, so that it is admissible within the framework of the constitutional court’s verdict,” he told the Stuttgarter Nachrichten newspaper, adding that investigators re responsible for potential illegalities in the use of spyware.

He said that state police forces did not develop their own surveillance software, but bought “multifunctional blank programmes” from different suppliers. These programmes have many illegal capabilities, he admitted, “but every spy programme is adapted to the system that the authorities want to penetrate.”

“There is no single trojan that is always used, can do everything and is therefore illegal,” he said.

Police unions have accused the government of passing responsibility to investigators without providing clear regulations.