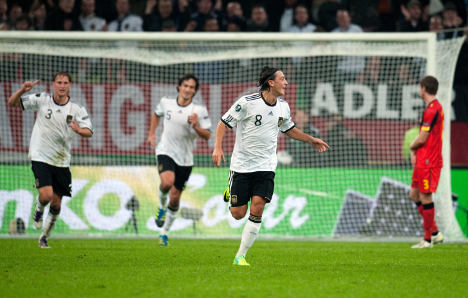 Mesut Özil, Andre Schürrle and Mario Gomez all scored for Joachim Löw’s side, who will be one of the favourites to win the European Championship in Poland and Ukraine after taking 30 points in group A.

In contrast, a talented young Belgian team – for whom Marouane Fellaini netted a late consolation – must now focus on reaching the next World Cup in Brazil after this defeat saw them finish in third place.

Guus Hiddink’s Turkey will go into next month’s playoffs after snatching second place with a 1-0 home win against Azerbaijan.

Belgium started well at Düsseldorf’s Esprit Arena but never troubled Manuel Neuer in the German goal in the early stages.

The first chance of note fell to Schürrle, who sent a curling shot just wide of the far post midway through the first-half.

Belgium goalkeeper Simon Mignolet then raced off his line to deny Gomez, before the hosts took the lead half an hour in thanks to a sensational strike.

The visiting defence failed to fully clear a corner, and Real Madrid’s Özil was on hand to thump home a shot off the underside of the bar from the edge of the box.

Belgium barely had time to regroup before they fell further behind three minutes later at the end of a devastating counter-attack.

A Belgian corner was cleared to Özil on the edge of his own area, and he headed the ball into the path of Gomez, who drove at the visiting defence before slipping in Schürrle.

The Bayer Leverkusen man then beat Mignolet with the coollest of chips.

To their credit, Belgium kept going and Jan Vertonghen had an effort deflected inches wide, while Gomez was again denied by Mignolet when clean through at the other end.

Gomez did make it 3-0 shortly after the restart, though, exchanging passes with Özil before firing across Mignolet and into the net for his 14th goal in 14 appearances for club and country this season.

Belgium now needed Azerbaijan to do them a favour in Istanbul to make the playoffs, but news of a Turkey goal killed off any remaining hopes for the large travelling contingent.

They did have something to shout about when Fellaini headed in to make it 3-1 four minutes from time, but that could not dampen the German celebrations at the end of another fine evening for Löw’s men.