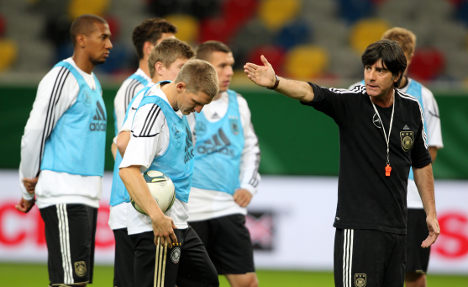 The Belgians are presently in second place, which would give them a play-off spot, but only a point ahead of Turkey, who should take three points against Azerbaijan.

Both Belgian coach Georges Leekens and his players acknowledge that beating Germany in Düsseldorf let alone denying them a record 10th successive win in the qualifiers is a tough ask – the last Belgian win on German soil dates back to 1983 against East Germany.

“It is almost mission impossible but even so I believe deep down we can do it,” said midfielder Timmy Simons, who plays for Bundesliga side Nuremberg.

Leekens – who is in his second spell as national coach having guided them to the 1998 World Cup finals but was sacked after they exited in the first round – said that but for a couple of moments of slapdash defending they would already be in the play-offs.

“My players deserve to be involved in this ‘final’ in Germany,” said the 62-year-old, who has had his contract extended to June 2014.

“But it is a pity it has come down to this. Before this game, we should have been second with a five point lead over the Turks,” added the coach, who has acquired the nickname of ‘Mack the Knife.’

Leekens was referring to his side having dropped valuable points along the way, letting in an 85th minute equalizer at the beginning of September against minnows Azerbaijan and letting modest Austria equalize in the third minute of extra time.

Leekens faces problems on the personnel front with Bayern Munich defender Daniel Van Buyten – whose mistake handed Germany a 1-0 win in Brussels – definitely out while more worrying are doubts whether highly-coveted playmaker Eden Hazard will be fit after being given a tough time by the Kazakh defenders during the 4-1 victory last Friday.

The Germans have continued to progress since their young side reached the World Cup semi-finals last year and while coach Joachim Löw is ready to make some changes from the side that impressed in the 3-1 away win over Turkey on Friday he doesn’t want to let the record slip from their grasp.

Löw is likely to recall Real Madrid playmaker Mesut Özil – who missed the Turkey game because of an Achilles tendon injury – while he has sent young star Mario Götze back to Borussia Dortmund.

“We are taking the Belgium match very seriously,” said Löw. “Also because we want to celebrate a new record of 10 victories in qualifiers.

“Özil will probably play, and I also intend to play Toni Kroos and Ilkay Gündogan and rest Mario (Götze). But you can’t replace the whole team because we don’t want to lose our rhythm.”

Whilst Löw has injury worries hanging over experienced midfielder Bastian Schweinsteiger and veteran striker Miroslav Klose he has the luxury of being able to call on Schweinsteiger’s Bayern Munich team-mate Toni Kroos and Bayern strikers Mario Gomez and Thomas Müller.

The Belgians will also have to find a way past outstanding German goalkeeper Manuel Neuer who has not let in a goal for Bayern in 1018 minutes and denied the Turkish strikers with some extraordinary reflex saves on Friday.