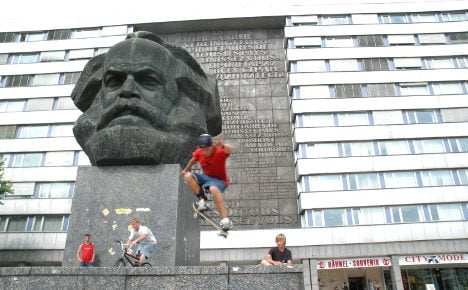 The 7.10-metre bronze of Marx’s head, which stands atop a 4.50-metre pedestal in the centre of the city, weighs around 40 tons and is the biggest portrait statue in the world and is a big tourist attraction, according to Chemnitz officials.

Fittingly for today’s capitalist and corporate world, €25,000 of the estimated €95,000 cost of renovation is being donated by Swedish furniture chain Ikea.

The statue by Soviet sculptor Lew Kerbel was unveiled on October 9, 1971 in the city which had been called Karl-Marx-Stadt during the existence of communist East Germany. The inner city, destroyed in World War II, was rebuilt as a model socialist centre, with a big square in the middle for meetings and demonstrations.

Although Marx, who was from Trier in south-western Germany, had never set foot in the city, he was to be its focus. Only after reunification in 1990, did the city regain its old name and became Chemnitz again.

Yet the Marx monument remained, and was never in danger of removal – despite many former socialist cities shifting Lenin and Marx statues out of their centres en masse during the period.

It has now been adopted as an icon, with T-shirts, chocolates and mini-statues selling to tourists throughout the city.

But the pedestal on which the massive head is placed, is in need of some attention, and will now be largely renovated, and the anchor which holds the statue onto the pedestal will be renewed.

The former state administrative building nearby, which bears the Marxist call, “Workers of the world unite!” in four different languages, is slated for renovation – within the heritage conservation protection which covers the entire square.