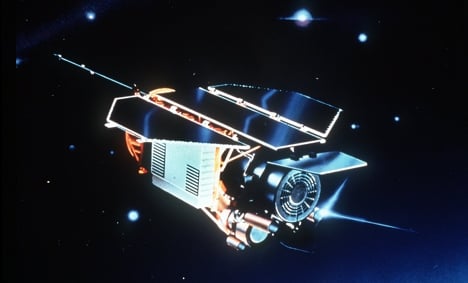 ROSAT, an X-ray telescope weighing nearly three tons and built with British and American help, has been orbiting the earth since 1990, making numerous discoveries, including the remnants of supernova explosions.

But in February, officials revealed they were losing control of the satellite and they couldn’t precisely say what would happen when it re-entered the earth’s atmosphere.

They haven’t been able to communicate with ROSA since the end of its mission in 1999.

Now they predict it should re-enter by the end of this month or early November. In a statement, the German Aerospace Centre (DLR) said 30 “individual pieces weighing a total of 1.6 tons may reach the surface of the earth.”

But experts are saying people should not panic. Although it is theoretically possible that someone could be hurt by falling debris – particularly ROSAT’s extremely heat-resistant mirror, which may not burn up upon re-entry – the odds of a squashing are tiny.

“Until now in the more than 50-years of space history not a single person has been harmed” by pieces of falling satellites, said Professor Heiner Klinkrad, director of the European Space Agency’s office that deals with space debris.

DLR reported that the possibility of an injury anywhere on earth from the debris is one in 2000. Klinkrad said the chances of a serious injury are much less.

Many scientists are expecting the satellite to drop harmlessly into the ocean and although they say the odds of injury or damage are small, emergency personnel in Germany are being prepared to deal with contingencies, DLR said.