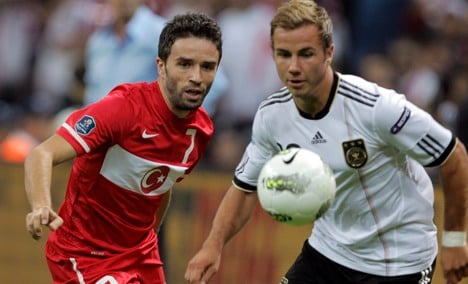 Gomez hit his 13th goal of the season in his 13th game for club and country during the first-half before Müller hit the second after being set-up by teenage wunderkind Mario Götze.

“We missed a few opportunities to score even more and can be satisfied but the game wasn’t easy, even though we have already qualified,” said Gomez.

Turkey’s Hakan Balta scored a late consolation goal for the hosts with ten minutes left before Schweinsteiger converted a late penalty to seal the win, but Müller admitted he was at fault for the Balta goal.

“We didn’t deal well with their counter-attacks and I was at fault for their goal, I was marking him and he suddenly got away from me,” said Müller.

The win leaves Germany with 27 points from nine games and Joachim Löw’s team had already booked their place for the finals, in Ukraine and Poland next June, after last month’s win over Austria. Only the Netherlands and Spain also have perfect records in their Euro 2012 campaigns.

The Germans host Belgium in Düsseldorf next Tuesday when Löw wants his side to finish their campaign with the perfect ten record.

“On Tuesday against Belgium, we will not change a lot of players, we are taking this game too seriously for that,” said Löw.

“I must pay a big compliment to the team, we dealt with a good opponent in a difficult atmosphere. To win in front of 50,000 Turks against a motivated team is a good result.”

As Belgium beat Kazakhstan 4-1, the defeat to Germany means Turkey drop to third in Group A and need to beat Azerbaijan next Tuesday, while hoping results go their way, to keep alive their dreams of qualifying for the finals.

Germany started with both veteran striker Miroslav Klose and play-maker Mesut Özil in the stands after the pair dropped out due to knee and Achilles tendon injuries respectively.

Having also been doubtful in the build-up, Gomez proved there was nothing wrong with his groin when he fired Germany into the lead on 35 minutes with a goal which went the length of the field.

Goalkeeper Manuel Neuer, who pulled off a superb reflex save to deny Turkey captain Hamit Altintop in the opening minutes, hurled the ball out onto the right wing to midfielder Müller who fired in a cross to Gomez’s feet.

After turning his marker, Gomez fired past Fenerbahce goalkeeper Volkan Demirel and the Bayern star nearly added a second when he drilled in a shot on 54 minutes which needed a full-strength dive from Demirel to keep him out.

At the other end, Germany defender Jerome Boateng, who switched from Manchester City to Bayern in the summer, pulled off a copy-book tackle to deny striker Burak Yilmaz just before the hour mark.

Müller capped a fine display with an impressive goal on 66 minutes when he hit a pass from Goetze at pace and rifled his shot past Demirel.

Berlin-born Turkey midfielder Balta pulled a goal back for the hosts with ten minutes left when he scored from close range to set up a tense finale.

Fenerbahce defender Gokhan Gonul brought down Mueller in the penalty area and English referee Martin Atkinson had no hesitation before pointing to the penalty-spot for Schweinsteiger to make it 3-1 four minutes from the final whistle.