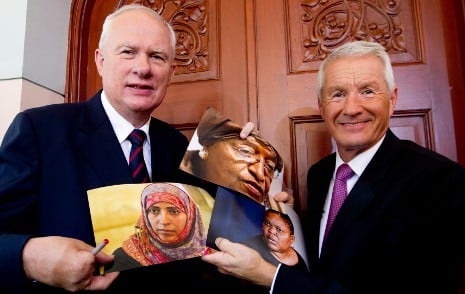 In a briefing on Friday, governmental spokesman Steffen Seibert said the decision was “sending a positive message to the whole world.”

The US-educated Sirleaf, 72, is the first female head of state in Africa and her country is emerging from years of civil war. She said the award was “for all Liberian people” and that it was the recognition of “many years of struggle for justice.”

Liberian political activist Gbowee was a leading force in the fight to end violence toward women during Liberia’s war. In an interview with the BBC she said, “This is a victory for women’s rights everywhere in the world. What could be better than three women winning the prize?”

“This is the recognition that we hear you, we see you, we acknowledge you,” she added.

Head of the Yemeni organisation Journalists Without Chains, Karman won the prize after her tireless campaign for women’s rights during the recent pro-democracy uprising in Yemen.

She is the only Arab woman to win in the history of the award.

Norwegian Nobel Committee president Thorbjørn Jagland said the women had received the award “for their non-violent struggle for the safety of women and for women’s rights to full participation in peace-building work.”

“We cannot achieve democracy and lasting peace in the world unless women achieve the same opportunities as men to influence developments at all levels of society,” he added.

Until the last minute, former Chancellor Helmut Kohl was said to be in the running, along with the European Union, Facebook creator Mark Zuckerberg and Google executive Wael Ghonim.

The Nobel Prize Committee received 241 nominations this year, which was a record high for the award.