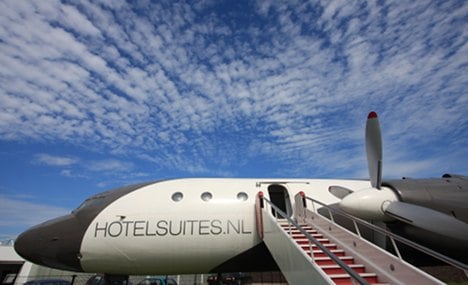 The cockpit of the Ilyushin 18 has been left intact, adding a surreal twist to the odd, one-room residence, where guests can hop straight from the luxury sleeping area into the pilot’s seat.

Dutch entrepreneur Ben Thijssen told The Local he had been looking for a plane to turn into a hotel for years before he found the Ilyushin 18 – he spotted it being used as a restaurant in Saxony-Anhalt village of Harbke, near the old East German border.

He bought it and organised for it to be trucked across Germany to the Dutch village of Tegue, near the German Ruhrgebiet. Hundreds of thousands of euros later, the luxury hotel – which sleeps two – was ready for its first guests.

“You can sleep in all kinds of accommodations, but not in an airplane,” he said. “I decided this was perfect.”

Click here for a virtual tour of the plane

The plane, which once flew for the East German state airline Interflug, also is said to have carried leaders such as Erich Honecker, although the history is somewhat sketchy. Thijssen said he had seen photos which seemed to show Honecker on the plane.

“There’s actually not much known about it, especially because it was part of the East German government and they tried to keep such things secret,” Thijssen.

As such it is a big draw for German guests. “They think it’s very amazing and a strange experience,” said Thijssen.

Some bring photos from their past in Eastern Germany. One man even showed up in a pilot’s uniform then spent the day in the on-board sauna. The next day, he was dressed normally and his wife was in a flight attendant’s uniform.

A former Ilyushin pilot even showed up to spend the night in the plane and said he was glad to see the cockpit was as he remembered.

Thijssen, who through his company hotelsuites.nl also offers stays in other unusual places such as prisons and boats. A stay in the plane starts at €350 per night and includes a luxury breakfast.