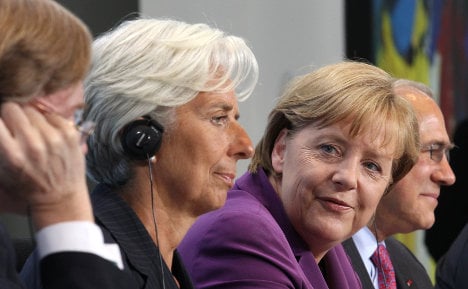 Merkel said banks should be recapitalised as quickly as possible if required, as concerns grow that the eurozone debt crisis is spilling over into a credit crunch.

“I think there would be a very clear need [to recapitalise] because this is money that is safely invested,” Merkel said, adding, “I don’t think we should hesitate.”

There would be “far greater damage” if banks needed to be rescued by governments, she said.

“But the first step is for banks to recapitalise themselves,” she stressed.

Later, she said the EU’s bailout fund, the European Financial Stability Fund, could step in to provide more cash to banks but “only under very certain conditions … and only if the euro as a whole were to be threatened.”

“I would like to recall that the EFSF is a facility which serves to provide assistance at a point in time when a country would threaten the stability of the euro and the eurozone as a whole,” the chancellor said.

Her comments came after European Commission President José Manuel Barroso suggested on Thursday a coordinated effort be made to recapitalise banks.

She had already made similar signals in Brussels Wednesday that helping the banks was “justified, if we have a joint approach” giving nervous financial markets an immediate boost after days of heavy losses.

The statement came after France and Belgium were forced to leap to the rescue of cross-border bank Dexia, the first European bank to be dragged down by the eurozone debt crisis – and which also had to be bailed out in 2008.

Merkel’s vice chancellor, Economy Minister Philipp Rösler arrived in Greece on Thursday with a delegation of around 50 Germany business representatives. He called for the Greek government to remove hurdles to foreign investments more quickly, and held out the prospect of German industry helping the Greeks to expand their solar energy business.

But Rösler said there was little prospect of external investment if the Greeks themselves were not showing confidence in their country. “He who wants external investors, must of course be ready to invest domestically,” he told the ZDF television station just before leaving Germany.