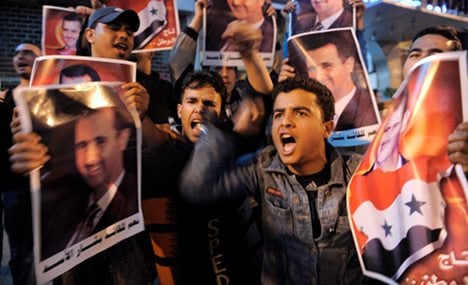 “The failure of the Syria resolution is very regrettable. The UN Security Council has not lived up to its responsibility for peace and security in the world,” said Foreign Minister Guido Westerwelle in a statement.

“Germany will continue to push, both internationally and especially within the European Union, for a clear position and pressure on the Syrian regime,” he added.

After nearly six months of negotiations, nine of the 15 countries on the Security Council voted for the resolution, drawn up by France, with Britain, Germany and Portugal.

The text called for “targeted measures” if Syrian President Bashar al-Assad did not end the assault on demonstrators, which the UN says has resulted in at least 2,700 deaths.

But Russia and China used their veto as permanent members of the council to kill the resolution.

During an angry debate in the Security Council chamber, US ambassador Susan Rice led a rare walkout protest when Syria’s UN envoy accused the United States of being a party to “genocide”.

Syria’s ambassador to the UN Bashar Ja’afari also attacked the UK and France for their sponsorship of the resolution, before turning on the Germans. “And there is Germany, the third musketeer. Germany, which persecuted the Jews in Europe, is now playing the honest broker of a dishonest and deceitful resolution,” he said.