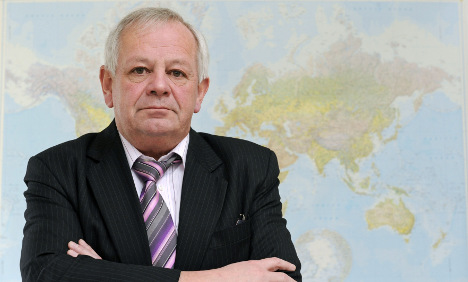 Kurt Schrimm, head of the Zentrale Stelle, the authority tasked with finding and investigating Nazi crimes, told The Local that the conviction of Demjanjuk in May changed the rules for his investigators in two important ways.

“For decades the framework was different, but the Demjanjuk case showed that German courts could have jurisdiction in a case which had taken place outside of Germany – and that there was no need for the prosecution of individual actions,” he said.

Ukraine-born Demjanjuk, 91, was sentenced to five years in prison by the Munich District Court for helping to murder at least 28,000 people while working as a guard at the Sobibor death camp in Poland. After his conviction, he was freed pending appeal.

Schrimm’s colleagues currently scattered around the world are now hoping to unearth other former workers at Nazi death camps, even though the chances of success may be slim.

He said he currently had active investigations in Ukraine, Belarus and Russia, as well as Argentina, Uruguay and Brazil, and is also in contact with the authorities in Bolivia.

The work is not Nazi-hunting as portrayed in Hollywood films, he said. “We are not trying to find Mr X. It is a question of looking at the records in local archives, working with people on the ground to filter out people who arrived from Germany during the late 1940s and 1950s.”

He admitted the chances of securing another conviction were small, but said it was his office’s responsibility to do the research to establish what happened when and who was involved – then the state prosecutor would decide whether the information was sufficient to launch a prosecution.

Although the legal precedents set by the Demjanjuk case could be overturned by a higher court, Schrimm said he was not prepared to wait for the appeals that lawyers said they would launch – his potential targets are too old.

“We cannot wait for the outcome of any appeal, it would take too long and we would lose valuable time. It could take around a year for any appeal to be decided,” he said.

He is being joined in the hunt by the Simon Wiesenthal Centre’s top man Efraim Zuroff, who told American news wire AP that he would launch a new campaign to raise awareness and try to track down remaining Nazi war criminals.

“It could be a very interesting final chapter,” he told AP. “This has tremendous implications even at this late date.”

In a statement sent to The Local, Elan Steinberg, vice president of the American Gathering of Holocaust Survivors said, “As our numbers – those of the victims – have also rapidly dwindled, this represents the final opportunity to witness justice carried out in our lifetimes. Time is the enemy here.

“The efforts by prosecutors is a praiseworthy signal that modern Germany is determined to demonstrate its unshakeable commitment to democracy and is a needed lesson for younger Germans far removed from the horrors committed by a previous generation.”