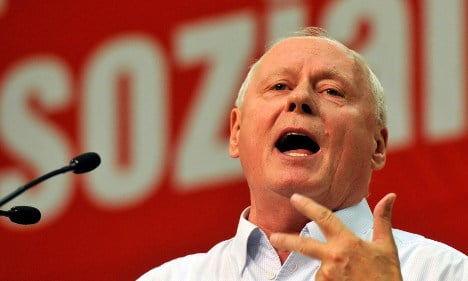 Rumours have been swirling through the party over the last few days, with those in favour and against, now taking their arguments public, amid stonewalling from the office of the man himself.

“He is simply a personality,” Giesela Brandes-Steggewentz, head of the party in Lower Saxony told the Die Welt paper. “I would be in favour,” of his return, she said.

She was supported by Eva Bulling-Schröter, Bavarian MP for the party. “I would have nothing against it. He was never gone,” she said.

“I would reckon that a candidature would be supported by the majority in North Rhine-Westphalia,” said Ralf Michalowsky, a state MP for the party told the paper. He said Lafontaine had already proven he could bring the party forward.

But Paul Schäfer, defence policy spokesman for the party said it was probably not a good idea. “I think a return of Lafontaine to the top of the party or the parliamentary fraction would be difficult,” he told the Mitteldeutsche Zeitung on Wednesday.

“It would be an admission of weakness,” he said, although he added that Lafontaine, “would be a revival for parliamentary debates. But despite this, the need for renewal remains.”

Lafontaine withdrew from federal politics at the start of last year after a cancer operation and shortly afterwards stepped down from his position as MP and then as chairman of the federal party, but has remained head of the party in the Saarland state parliament.

A report over the weekend in Der Spiegel suggested the 68-year-old was preparing for a parliamentary candidacy in 2013, but this was denied by his party in Saarland where a spokeswoman said, “That is speculation and we do not take part in speculation.”