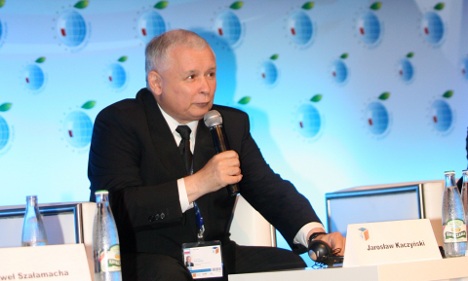 Kaczynski, who heads the conservative Law and Justice party and was Poland’s prime minister in 2006-2007, wrote that Merkel “represents the generation of German politicians who want to rebuild German imperial power.”

“A strategic axis with Moscow is part of that and Poland can only be an obstacle to it. Our country must be made to submit in one way or another,” Kaczynski states in “The Poland of our Dreams”.

“The critical thing is that Merkel wants Poland to submit, a soft submission, perhaps, but a submission nonetheless,” the book says.

In the book, he also suggests Merkel may have been propelled into office in 2005 by political forces which he did not identify.

“I don’t think that the awarding of the post of chancellor to Angela Merkel was pure chance. But I won’t elaborate on my belief, I’ll leave that to the political scientists and historians,” he wrote.

In an interview, the Polish edition of Newsweek asked Kaczynski if he was implying that after the fall of East Germany’s communist regime in 1989, its Stasi secret police somehow piloted Merkel to the helm of united Germany.

Merkel, now 57, was raised in East Germany and forged her political career in the centre-right Christian Democrats after German unification in 1990.

Asked to clarify his characterisation of Merkel, Kaczynski said, “she knows what I mean.”

While prime minister, Kaczynski, now 62, was notorious for outbursts against Berlin and also locked horns with other European Union capitals.

Tusk, 54, has worked to mend fences since winning office in a 2007 snap election after Kaczynski’s fractious government crumbled.

In his book, Kaczynski also expressed concern about German investments.

“I can’t claim to be overjoyed about German investment in western Poland,” he said. “We could wake up one day and find ourselves in a smaller Poland.”

At the behest of the victorious Allies, the Polish border was shifted westwards after World War Two into long-German territory, to make up for lands lost in the east to the Soviet Union.

Kaczynski often used anti-German rhetoric in the 2005 general election, playing on the antipathy of a swathe of the Polish population that is rooted in centuries of bad blood, Nazi Germany’s World War II occupation and post-war communist rhetoric.