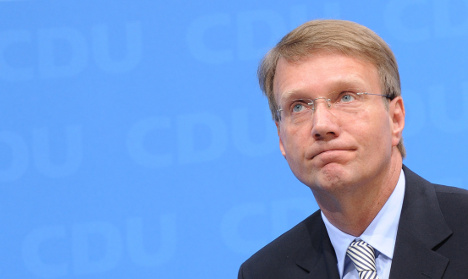 “I am angry with myself for what happened, and I am extraordinarily sorry for it,” Pofalla told Tuesday’s Bild newspaper.

He said he had already settled things privately with Bosbach after last Monday’s outburst in which he had said, “I can’t look at your mug any more,” and responded to a reminder of MPs’ right to vote according to their consciences with, “I can’t listen to that shit any longer.”

Bosbach said he accepted the apology, telling the paper, “This is finished now as far as I am concerned. For me there remain no political or personal differences.”

But despite Pofalla’s apology and Bosbach’s acceptance of it, senior members of Merkel’s Christian Democratic Union (CDU) were still busy trying to limit the damage done to the party, and calling for the matter to be resigned to the past.

State secretary in the economy ministry Peter Hintze said the discussion was unnecessary, and called for it to be declared over. Deputy head of the CDU parliamentary party, Michael Fuchs also called for the subject to be dropped. Pofalla had, “gone somewhat too far, but that is something which should not be overrated,” he said.

But the grassroots of the party remain unhappy with the impression given by Merkel’s man verbally attacking the most senior nay-sayer to the increased euro bail-out law.

Lower Saxony CDU politician Frank Oesterhelweg called for “personnel changes to be urgently undertaken at the top echelon of the Union.”

“We have at the grassroots accepted this fiasco for too long … if things are not cleared up soon, members and voters will desert us en masse.”

He said that Merkel and what he called her entourage, were making the people of Germany eat what they put on the table – even though it had long been clear that she was a kitchen manager without a recipe and that they were serving up a “conceptless mush.”

He said massive political pressure was being exerted by Merkel’s political attack dogs on those from her own party who disagreed with the government’s major policies, such as supporting an increase in Germany’s contribution to the Greek bail-out fund.

Merkel got the necessary majority to pass the last on September 29, without having to depend on the opposition parties, but only after a “practice vote” and heavy lobbying of her party members who seemed likely to vote against it.