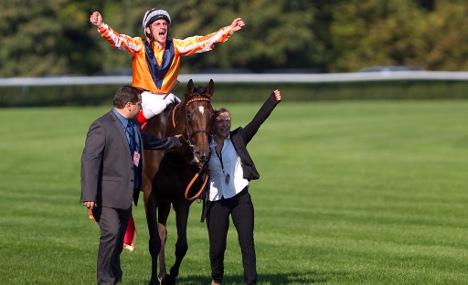 The three-year-old filly had only been supplemented by trainer Peter Schiergen on Thursday but made light of that, and her odds of 20/1, to come home five lengths clear under Andrasch Starke and emulate wide outsider Star Appeal’s win in 1975.

Danedream’s win also rewarded Japanese owner-breeder Teruya Yoshida’s shrewd decision to buy half of her last week from Gestut Berg Eberstein, who themselves had only shelled out €9,000 for her as a two-year-old.

Peintre Celebre had held the race record of 2min 24.60 since 1997. Shareta, whose stablemate and favourite Sarafina never threatened and finished seventh, was second at 66/1 while another filly, last year’s Epsom and Irish Oaks winner Snow Fairy, was a fast finishing third at 14/1.

It was the first all fillies 1-2-3 since All Along led home Sun Princess and LuthEnchantee in 1983.

“I don’t believe it, she’s the best horse I’ve ever trained,” said Danedream’s trainer Peter Schiergen, who is keen to send her to the Breeders Cup early in November.

He added: “She is a small filly with a big, big heart and there’s no better race to win. This is a really big day for German racing.”

Ed Dunlop, the trainer of Snow Fairy, was delighted with his tough filly’s performance which replicated that of his only previous runner Ouija Board in 2004.

“It was a marvellous run. I’m really pleased with her and to finish third in the Arc, well that’s great,” said the 43-year-old, whose father John, also a trainer, has yet to win an Arc. “I will keep her in training next year, maybe have another go at it but in the immediate future we will take her to Japan.”

Former Australian champion So You Think was given every chance with two of his stablemates Treasure Beach and St Nicholas Abbey hitting the front to set the pace.

His trainer Aidan O’Brien was not willing to give an immediate appraisal of the eight-time Group One winner’s performance immediately afterwards.

“I will have to look at the replay of the race but if the owners are willing I would like to set him towards the Breeders Cup,” he said.

So You Think’s jockey Seamus Heffernan said it had been a tough race to judge.

“I wasn’t in a great position coming into the straight, but if there was one thing I might wish to do over again it would be to have got into a better spot in the early part of the race.”

Of the other fancied runners, seven-time winning Arc trainer Andre Fabre’s Meandre never looked likely to add to that tally as he was pulling from the off and finished seventh.

Highly-fancied and well backed Japanese runner Hiruno D’Amour was prominent but stumbled coming into the straight and was then baulked leaving him with no chance and leaving Japan still without a win on the race.

Last year’s winner Workforce was never in the reckoning, not liking the fast ground and was 12th of the 16-runner field while last year’s runner-up Nakayama Festa was 11th. 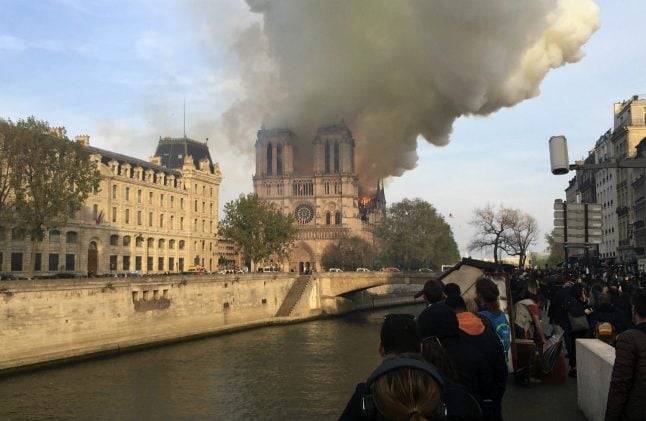 Chancellor Angela Merkel’s office called the cathedral a “symbol of France and of our European culture”.

“These horrible images of Notre-Dame on fire are painful,” Merkel’s spokesman Steffen Seibert said on Twitter.

“Notre-Dame is a symbol of France and of our European culture. Our thoughts are with our French friends.”

SEE ALSO: What we know so far about the devastating Notre-Dame fire and how it started

The blaze swept through the building, causing the iconic spire to collapse in scenes that shocked the world.

The fire started in the attic of the historic Cathedral at around 6.50pm, and within minutes images and videos of the blaze were being shared around the world.
The cause of the blaze has not been confirmed but the 850-year-old cathedral had been undergoing intense restoration work.
Built between the years 1163 and 1345, Notre-Dame is one of the most popular tourist sites in Paris, drawing around 13 million people every year.

Germany’s Foreign Minister Heiko Maas also commented on the fire. He said it “hits us in the heart”.

“Our thoughts are with all the emergency services and our French friends.” Maas added that he hoped no one was hurt in the blaze. People pray at the sight of Notre-Dame burning. Photo: DPA

Andrea Nahles, leader of the centre-left Social Democracts (SPD) said seeing the cathedral in flames was a “terrible sight”. She praised the firefighters “who are trying to save the Parisian landmark”.

“A tragic day for our French friends, we are with them,” she added.

Greens co-leader Annalena Baerbock also spoke of her sadness. She wrote in French that her heart was with Paris and added: “With Notre-Dame, a part of our European history is burning at this moment. How incredibly sad.”

Leader of the pro-business Free Democrats said: “To all the French: we weep with you.”

Markus Söder, leader of the centre-right Christian Socialists, the sister party of Merkel’s Christian Democrats, said: “The pictures of Notre-Dame are shocking and sad. Notre-Dame is a symbol of French and European history and culture.” Söder added that he hoped it could be rebuilt quickly.

As was the case around the world, German newspapers led with the story.

Der Spiegel had the headline “Notre-Dame in flames, the burning sky over Paris.”  Süddeutsche Zeitung led with “Battle for the heart of the city”, while Bild wrote on a hopeful note: “We are rebuilding Notre-Dame.”

PARTNER CONTENT
VIDEO: My Parisian life: working in ‘the heart of the luxury industry’

PARTNER CONTENT
‘It really feels like a dream come true’: working in a Paris palace hotel
Url copied to clipboard!