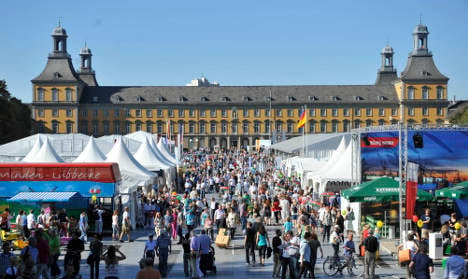 Politicians used Saturday’s start of the festival to call upon the federal government to maintain the commitment it made to support Bonn after the decision was made to move the government to Bonn after reunification of the country.

Hannelore Kraft, NRW state premier, said the state government saw, “the years-long creeping process of movement of jobs at federal ministries from the Rhine to the Spree,” with great concern.

She will be joined on Monday for the main celebration of Germany’s reunification by President Christian Wulff and Chancellor Angela Merkel, among others.

At least 200,000 people are expected at the festival each day of the three-day event, which also marks the 1946 founding of North-Rhine Westphalia – the British occupying forces decided to merge the North-Rhine and Westphalia provinces to create a new state.

Four men were arrested on Saturday night, suspected of possibly planning an attack on the festival, police said on Sunday.

The German-born men, aged between 22 and 27, are said to be members of the Islamist scene in the region, and had got hold of firearms. No further details were available.