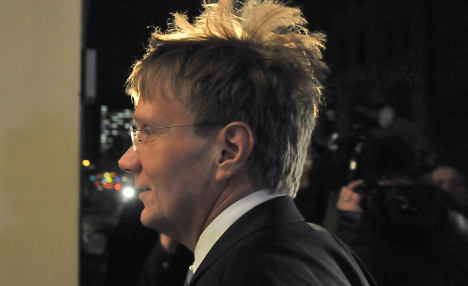 Although the Chancellor secured the necessary majority to pass the law with votes from her governing coalition on Thusday, it seems the head of her chancellery Ronald Pofalla lost his nerve with the main CDU dissenter Wolfgang Bosbach just a few days before.

They clashed at the CDU North-Rhine Westphalia group meeting last Monday, after which Pofalla told Bosbach, “I can’t look at your mug any more,” according to a report in Sunday’s Tagesspiegel newspaper.

And when Bosbach reminded him in a calm manner of the constitutional right of MPs to vote according to their conscience, Pofalla said, “I can’t listen to that shit any longer.”

People who were at a meeting have confirmed the exchange, saying that towards the end of the meeting the atmosphere turned unpleasant, with Pofalla speaking derogatorily about MPs who were sceptical of government plans to increase the German contribution to the European Financial Stability Facility.

The situation peaked with the bad-tempered attack on Bosbach. Yet Pofalla is said to have sent an apology via text message the following day, the Tagesspiegel reported.

“Ronald Pofalla came up to me, we made our thoughts known, and with that as far as I am concerned, the matter was over,” Bosbach told the newspaper. He added that he would meet Pofalla in the chancellery next week for a quiet chat.

Yet the attack has left at least one MP dissatisfied. Without naming names, Erika Steinbach, CDU MP from Hesse, told the paper, “It is a neglect of democratic tradition when other opinions are no longer tolerated and respected.”

She said the coalition must not create the impression that critics of measures taken to try to rescue the euro, were silenced.