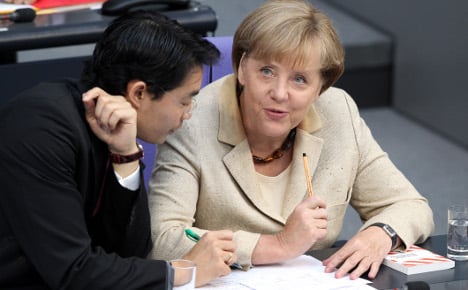 As expected, the German parliament voted to increase the scope and scale of the European Financial Stability Facility (EFSF). 523 MPs voted in favour of the measure, 85 voted against, with three abstentions.

The vote before the Bundestag lower house on expanding the bailout fund to €440 billion ($599 billion) had been cast as a crucial test of Merkel’s authority amid fears of a major backbench rebellion.

Merkel’s Christian Democratic Union (CDU) governs Germany in coalition with the Free Democratic Party (FDP) in a fraught coalition that has come under increasing pressure over its handling of the eurozone crisis.

But Merkel got four more than the 311 votes she needed from her own side on Thursday, meaning she did not have to rely on the opposition to secure the victory.

Germany, the eurozone paymaster, became the 11th country among the 17 using the euro to agree to boost the scope and size of the fund.

“The process is moving forward,” he said, citing ratification by another tight-ship economy in Finland on Wednesday. Both countries have seen anti-EU sentiment rise significantly as the strain of successive bailouts for Greece, Ireland and Portugal weighs on voters and taxpayers.

“We are confident we can achieve (full ratification) by mid-October,” Alrafaj said.

European Union leaders will stage a crucial summit in Brussels on October 17 and 18, at which diverging views on a second bailout for Greece, or an early default, must be addressed.

Opening the lively, at times fraught debate, Volker Kauder, who heads Merkel’s parliamentary group of conservatives, said it was a pivotal moment in the spiralling eurozone debt crisis.