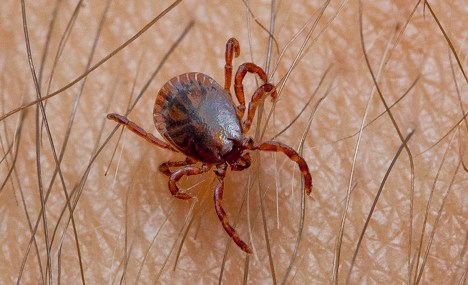 So far this year 187 people have fallen ill from dangerous tick-borne encephalitis in Baden-Württemberg, compared to roughly 140 in 2010. And authorities reported that one person has died from the disease, although they emphasized that people should not panic.

Experts say the increased disease mirrors a pattern seen in communities across the region – in one location cases of the disease tripled this year, officials said.

Tick-borne encephalitis is among the most feared of tick-related illnesses. It can cause severe brain damage and death in one to two percent of cases.

There is no cure, but potential victims can be inoculated before they’re infected. Other tick-borne diseases include Lyme disease and even temporary paralysis.

Ticks themselves live by burrowing into animals’ and humans’ skin to suck blood. Once they are attached to a person, medical attention is often needed to pull the ticks out and ensure their body parts don’t get stuck inside the skin.

Authorities say the increase in tick-related diseases this year was not caused by a rise in the number of ticks, but because people are heading outside more to enjoy the comfortable weather in areas where ticks are common. Plus vaccination rates continue to be low.

“Last summer people went out less because of bad weather so tick activity was lower,” said Astrid Kirch, a biologist at the Baden-Württemberg’s health ministry.