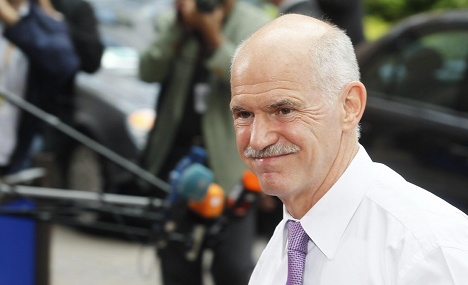 Visiting Berlin to meet Chancellor Angela Merkel, Greek Prime Minister George Papandreou insisted that Athens was pulling out all the stops to resolve Europe’s snowballing debt crisis and prevent it from bringing down the euro project as a whole.

“I can guarantee that Greece will live up to all its commitments. I promise you we Greeks will soon fight our way back to growth and prosperity after this period of pain,” he insisted, adding that pillorying Greece would not help.

“If people feel only punishment and scorn, this crisis will not become an opportunity, it will become a lost cause. And we are determined to make this a success,” the Greek leader told the Federation of German Industries ahead of a crunch meeting with German Chancellor Angela Merkel on Tuesday evening.

Greece was making a “superhuman effort” to bring down its debt, Papandreou insisted.

Merkel, for her part, said the crisis was not a crisis in the common currency itself, but in the huge debt piles amassed by eurozone members.

“We don’t have a euro crisis, but a debt crisis,” Merkel said, speaking after Papandreou at the German business leaders’ meeting

The two leaders were due to meet for a working dinner later amid increasing speculation that Greece could default, with the next instalment of debt aid due under its May 2010 bailout accord with the EU and IMF.

Athens says the aid payment, worth €8 billion ($11 billion), is essential for it to continue paying its bills.

Merkel has to get her increasingly tetchy coalition into line on the matter by Thursday for a parliamentary vote on increasing contributions to the European Financial Stability Fund.

While the legislation is certain to pass – the opposition has vowed to vote in favour – Merkel faces the humiliation of having to rely on them because of a threatened backbench rebellion from her governing coalition.

She said on Tuesday that American calls for more economic stimulus to boost demand were not helpful.

“We need to combine economic growth with solid public finances … we are not in favour of new stimulus programmes,” she said.

Finance Minister Wolfgang Schaüble also aimed barbed comments at US President Barack Obama who had warned on Monday that Europe’s failure to tackle crippling Greek debt was “scaring the world”.

“It’s always much easier to give advice to others than to decide for yourself. I am well prepared to give advice to the US government,” Schaüble said in an English-language address to the European School of Management and Technology in Berlin.

Despite the sharp words, global stocks rallied for a second day running with huge advances in Europe on belief that EU and world leaders are preparing a blockbuster response to the eurozone debt crisis, traders said.