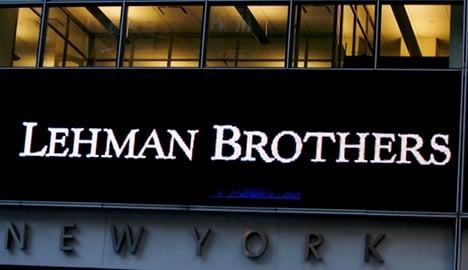 The Federal Court of Justice in Karlsruhe ruled that the investors had not been inadequately or falsely advised by a Hamburg savings bank which had suggested they buy Lehman Brothers products.

The couple had each invested €10,000 in products issued by Lehman – on the recommendation of the Hamburg Sparkasse bank.

When Lehman Brothers declared bankruptcy, the investment papers became worthless. And although the certificates were 100 percent guaranteed, because they were not subject to deposit insurance they became worthless after the bankruptcy.

The couple – a teacher who has since died, and his nutrition advisor wife – had worked their way through the German court system seeking compensation for the alleged bad advice from the savings bank.

But the judges were sceptical that the savings bank was at fault. An explanation of the risk that the issuer of a bond might become insolvent is only necessary under certain conditions, and there was no indication that Lehman could go bankrupt when the certificates were bought in 2006 and 2007, one judge said.

Consumer advocacy groups estimate that up to 50,000 German investors bought investment documents backed by Lehman, paying between €700 million and €1 billion for them.