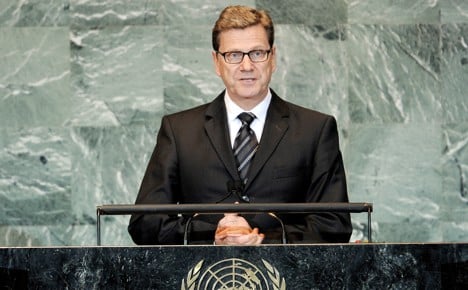 Westerwelle appealed to the Israelis and the Palestinians to return to the negotiating table.

The foreign minister criticized both Israel and the Palestinian Authority for last week’s row over Palestine’s bid for statehood at the UN. But he said Germany only supported the establishment of a Palestinian state after a negotiated settlement, taking the same line as Israel and the US.

“I don’t want to leave any doubt here: the safety of Israel is a national interest for Germany,” Westerwelle told the UN General Assembly.

“There will be no lasting peace without safety for Israel,” he added. “Peace talks between Israelis and Palestinians are possible; a Palestinian state is possible; two countries standing side-by-side in peace is possible. But we can only get there through negotiations.”

Chancellor Angela Merkel on Monday pressed Palestinian President Mahmud Abbas to accept a Middle East Quartet proposal to open negotiations with Israel to resolve the conflict by the end of next year.

Merkel “spoke by telephone with Abbas, insisting on opening negotiations with Israel on the basis of the Quartet’s proposal,” a spokesman for the German leader said.

Westerwelle was speaking as the Security Council began debating an application for full UN membership handed in by Abbas last Friday.

Germany has a non-permanent seat on the Security Council, and therefore a vote in the debate, but Westerwelle did not explicitly say which way Berlin would vote. The United States has already said it would veto any vote. The deliberations are expected to take several months.