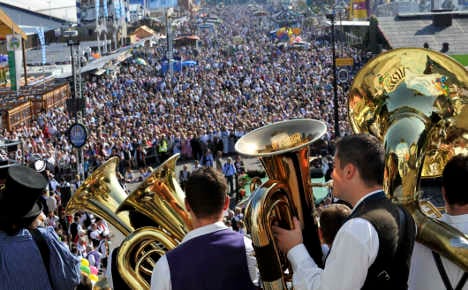 They are drinking as much as last year too, with 3.4 million litres being sold in the first seven days. Changeable weather at the start of the festival had been succeeded by ‘perfect conditions,’ said Gabriele Weishäuple, Oktoberfest manager.

Most of the people attending – 72 percent – came from Munich and the surrounding area, with a further eight percent from other parts of Germany. The other 20 percent were foreigners, with many from Italy, but also Canada, Russia, Spain, the USA and Asian countries, she said.

While thirst for beer has remained unchanged, the appetite for meat seems to have declined somewhat, with only 58 oxen having been consumed so far, compared with 61 at this stage of the festival last year. Traditional sweets such as candyfloss are a great hit this years, said Weishäupl.

Many guests have been showing up in traditional clothing – Germans in lederhosen and dirndls, and Scots, Dutch and people from South Tirol wearing their own national costumes.

Munich Mayor Christian Ude said that so far the festival had been peaceful and safe, with the only unwelcome increase being the number of people caught trying to steal the enormous glasses in which the beer is served.

This time last year 68,000 people had been caught trying to steal them – this year 96,000 have been attempting to leave with a massive glass.