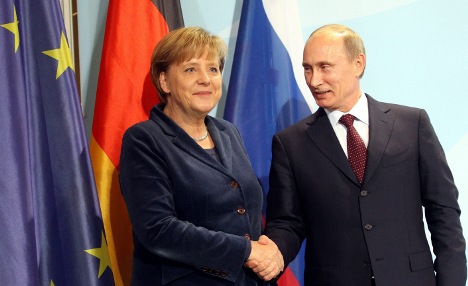 In a first reaction to Putin’s nomination to presidential candidate for his United Russia party – which effectively crowns him Russian leader – Merkel was less than warm about the prospect, but diplomatically optimistic.

She said she had worked well with current president Dmitry Medvedev until now. “The cooperation will be good with every Russian president, as Germany and Russia are joined by a strategic partnership.”

Putin, 58, was president for two terms from 2000 until 2008 when the Russian constitution says he had to be replaced. He stepped down in favour of Medvedev, becoming prime minister instead – and was broadly seen as continuing to pull the levers of Russian power.

Medvedev will most likely become prime minister again after the election next March.

The likely return of the former KGB agent who served in East Germany, to the head of the Russian government will be accompanied by ambitious plans.

He told his party conference that Russia’s economy must grow by up to seven percent a year, and should become one of the five biggest national economies in the world. He said he intended to create 20 million new jobs in modern industry over the coming 20 years.

Germany is highly dependent on Russian gas, and there is speculation that this could increase as the country’s nuclear power stations are closed by 2022.

Yet this July Merkel sought to shut off such assumptions during a visit to Germany by Medvedev, saying that Germany would develop its coal-fired electricity generation capacity, energy efficiency and renewable power sources over the coming years.