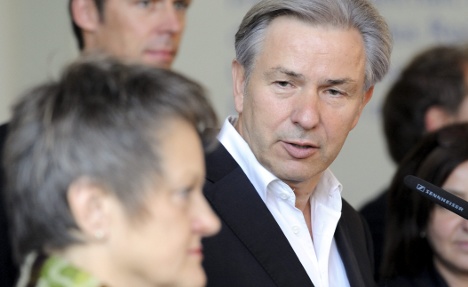 Mayor Klaus Wowereit said on Friday that a second round of pre-negotiation talks with the Green leadership had produced hopeful signs that agreement could be reached on conflict points such as the expansion of the A100 autobahn which circles the capital.

Official coalition negotiations could start as early as Monday, if Wowereit’s SPD leadership agree with him, he said, after a more than six-hour session between the two parties on Friday.

A successful Red-Green coalition in Berlin would be taken by many as a signal for the return of a left-leaning environmental coalition on a national level, as had been the case between 1998 and 2005.

The Berlin Greens had campaigned on, among other things, their opposition to the expansion of the A100, and have also been against the massive building project at Schönefeld airport, which is set to be turned into an international air transport hub.

It remains to be seen what kind of a compromise will be possible on these subjects – the Greens have recently dropped their absolute opposition to the A100 project, but could lose credibility if they do not manage to make the SPD move at all.

Green fraction leader Volker Ratzmann said there were many areas of agreement – and that a compromise had been found for the A100 topic. He said the Greens would make sure that the capital had a, “sustainable, ecological and modern infrastructure.”

Wowereit said the parties had also been talking about the metro S-bahn, which has been heavily criticised over the last few years for increasing unreliability. The parties were largely agreed on that, he said. Until now the SPD had been calling for the system to be kept in the hands of the municipality, while the Greens had said they wanted to offer the contract to others.

The SPD will now consider the results of its talks with the Greens, and compare them with what happened during talks with the Christian Democratic Union in the city. The CDU has always been in favour of both the A100 and the airport expansion plans, but the Greens have been seen as the more natural coalition partners.

Wowereit needs to find a new coalition partner after last Sunday election results made a continuation of his state government with the socialist Left party impossible to continue.

The SPD won almost 29 percent of the vote, with the CDU on 23 percent. The Greens won almost 18 percent while the Left dropped nearly two percentage points to 11. The surprise entry to the state parliament was the Pirate Party, which got nine percent. The business-friendly Free Democratic Party – Angela Merkel’s coalition party in the national government, was left smashed, with less than two percent of the vote.