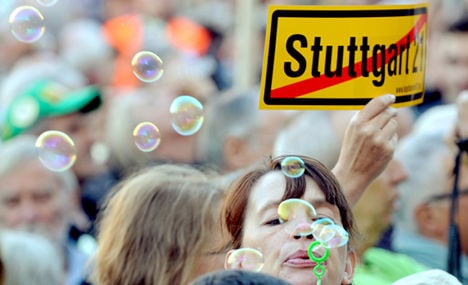 The dailies Die Welt and the Frankfurter Allgemeine Zeitung reported that project costs would likely remain under the €4.5-billion ceiling previously agreed upon by the project’s partners, but only just.

A spokesman for Stuttgart 21 declined to immediately confirm or deny the reports.

But opponents mounted massive protests against the project last year, calling it too expensive and unnecessary. In October 2010, more than 100 demonstrators were injured in a violent clash with police. This summer nine police officers were hurt in further clashes.

Lengthy talks between state officials, national rail provider Deutsche Bahn and Stuttgart 21 opponents have taken place. But officials ultimately said they were making a few adjustments while still going ahead with the project, after a “stress test” in July showed the project should continue.

The latest news is likely to inflame activists who have long insisted that the project is wasteful and costly – and there’s no guarantee costs will stay below the ceiling, politicians fretted.

Winfried Hermann, Baden-Württemberg’s state transport minister, said he believes not all costs have been accounted for and that the final price-tag could top €4.5 billion.

A meeting is scheduled for Friday where partners funding the project, including state officials and Deutsche Bahn, will meet to discuss costs and the current situation.

But state officials, who have come under steep pressure to oppose Stuttgart 21, said Deutsche Bahn has been slow in providing required information.

Documents on costs have only just been given to the government by the company, making a complete analysis difficult, a government spokesman said.

State premier Winfried Kretschmann lashed out at the conduct of Deutsche Bahn saying its slowness was an “indefensible practice.” Deutsche Bahn has denied being obstructive.