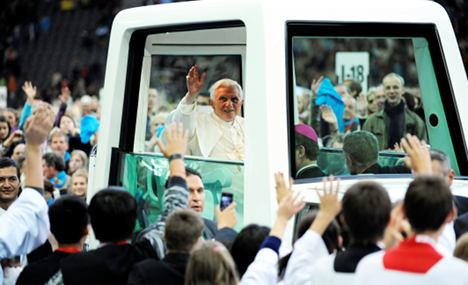 “The Church contains both good and bad fish, wheat and weeds,” he said, apparently referring to the widespread child abuse at Catholic institutions in Germany uncovered last year. “And if only these negative aspects are taken into account, then the great and deep mystery of the Church is no longer seen.”

The pope’s homily came on a wet and drizzly evening as 70,000 people packed into the stadium that was originally used for the Olympics in 1936.

But the wet weather didn’t dampen the spirits of believers, who had gathered after a day of protests and controversy in German capital, during which the pope met with national leaders. Despite a widely praised speech before the Bundestag, some German politicians continued to insist that because of the scandals and the pontiff’s conservative stance on issues such as homosexuality, he should never have been invited to speak before parliament.

Nevertheless, he received a warm welcome at the stadium. Thousands of attendees loudly cheered as he drove around the grounds in his “Popemobile,” stopping to wave to the surging crowd and kiss a few babies. He was given a model of Berlin’s Brandenburg Gate by Berlin city officials just before he began to lead the mass. At one point, government leaders struggled to slip on ponchos as the rain begin the fall.

The pope’s main message seemed to be that Germany should reclaim its belief in God – the pontiff has recently been complaining that the country has become increasingly secular and has abandoned its Christian roots.

“In Christ, we belong together,” he preached. “Within this communion, he supports us and, at the same time, all the members support one another. They stand firm together against the storm and they offer one another protection.”

But the pope also indirectly touched on the Church’s continuing reform efforts, which some have charged don’t go far enough. He emphasized, however, that believers must have a realistic view of the Church as a flawed and human structure, while taking comfort in their belief in Christ.

“Dissatisfaction and discontent begin to spread when people’s superficial and mistaken notions of the Church, their ‘dream Church,’ fail to materialize,” he said.