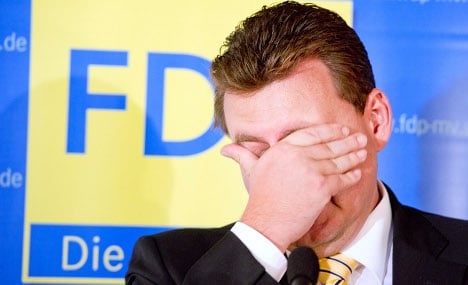 The survey, commissioned by the magazine Stern and broadcaster RTL, shows around two-thirds of Germans are dissatisfied with the coalition’s performance in maintaining the stability of the economy and the euro.

The party was booted out of Berlin’s state parliament at the weekend and now has the support of just 3 percent of Germans nationally – a drop from 4 percent last week – according to the poll, which was conducted by Forsa.

The SPD scores 28 percent in the poll, while the Greens attract 20 percent of support.

Much of the frustration with the government seems to be driven by continuing economic instability in Europe and the seeming inability of political leaders to do anything about it. Markets have been fluctuating wildly and, in something that was once seen as unthinkable, there has been talk that Greece may be forced to pull out of the monetary eurozone, which has long been seen as a symbol of European unity.

Speaking of the FDP, Manfred Güllner, Forsa’s head, told Stern, “The change in leadership has not achieved anything.”

He said that Rösler should not get all the blame for the party’s travails. Instead, its long-term inability to get anything done should be questioned.

“In 2009, the middle class voted for the FDP because it promised to cut red tape,” he said. “It has done nothing since.”

Given the problems with the FDP, only about half (54 percent) of Germans believe the ruling coalition will hold together until the next general election in autumn 2013. If it collapses before this, 70 percent of those asked said they would like to see early elections.